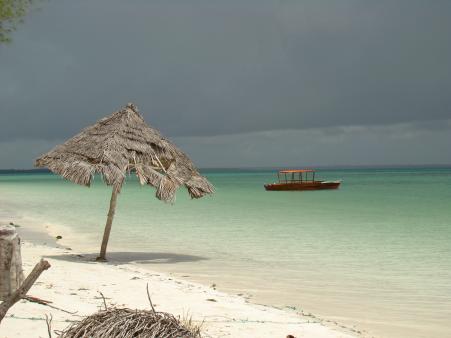 Zanzibar: even the name beckoned to me with bold strokes of an 18th century quill pen. At the cultural and geographical intersection of the African and Arabian worlds, Zanzibar is an island of turquoise waters reflecting the bright canvas sails of dhows, with forests full of birdsong, markets redolent of exotic spices, and a port town whose labrynthine alleyways whisper of Arabian Nights. But Zanzibar is equally a place of mystery and intrigue where even the dark eyed women go veiled. Everything about this spice island beckoned to me.

And so we went there to find out, and we were not disappointed. We found Omani palaces where the Sultan's concubines bathed in marble pools, mournful slave markets, aromatic spice bazaars, ornate cathedrals, and a thick-walled fortress that dates back to the Ottoman Empire. We also found beaches as white as porcelain, Colobus monkeys in the treetops, and a warm, pleasant people who never failed to tell us "karibu" ("welcome").

We spent several nights on the east coast (Unguja) watching the morning sun rise over the coral reef and the women harvest seaweed from the shallow, clear waters of the lagoon. There we stayed in a Swahili-style bungalow with a 4 poster bed, a gauzy mosquito net, and a rooftop terrace with views of the ocean. The strong wind made the water unpleasant to swim in so afternoons we curled up, Swahili style, on the woven mats of the reading room, and drank zam-zam spiced tea.

We spent the second half of our stay in Stone Town in a restored Omani town home called Beit al Amaan ("the house of peace"). Peaceful it was, and as quiet as starlight. From a terrace overlooking the Zanzibar Strait we watched a solitary dhow navigate the waters of the Zanzibar channel, tacking slowy upwind as it approached the harbor in the fading light of early evening. For the first time in my life I watched the sun set to the north of me. And then it was night: we feasted like royalty in the Forodhani Gardens by the water's edge.

We could easily have spent our days exploring the narrow alleyways of Stone Town, where we walked past dozens of ornately carved doorways each more elaborate than the previous, and peered inside into serene courtyards thick with afternoon shadow. I couldn't help thinking it was a glimpse of a time perhaps more pleasant than our own. One morning we ventured upland to the spice plantations, and another evening we sailed along the coast in a wooden dhow.

Neither solely the obvious heir to Scheherazade's tales nor the warrior creed of the Serengeti plain, Zanzibar was rather a little of both. And there was much that reminded me of the life I led in Southeast Asia as well, from the jackfruit and rambutans we snacked on while walking to the staccato sing-song of Swahili, which was strongly reminiscent of Bahasa Indonesia (both grew out of coastal traders' languages). But mostly Zanzibar was its own, unpresumptuous self, not Africa but not Arabia, not Asia, but not the West.

Although Zanzibar's allure is the legacy of myth and legend, I found it every bit as relevant to the present, where peoples of many cultures gather in the house of peace to enjoy spiced seafood cooked over an open fire. But while Zanzibaris check their email and charge their cellphones, very much part of the 21st century, sleek lateen-rigged dhows still sail along Zanzibar's shores in the evening winds and beyond the minarets and crenellated rooflines of the city, the sun still sets to the sound of the muezzin's call to prayer.