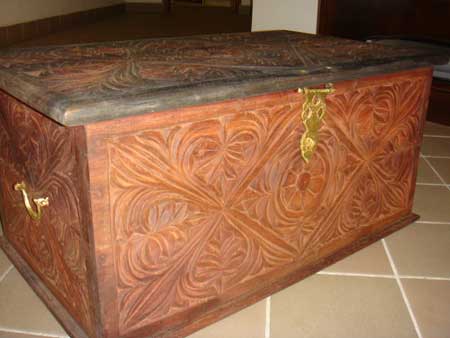 Since the age of sailing ships and spice routes, a Zanzibar chest has evoked treasure, mystery, and the legends of the East. They accompanied queens into exile and princes on conquest. A hard carved coffer plated with hammered metals, interior compartments and secret drawers, they were hard to make and harder to obtain. Their legends typically preceded them. The chests are still made today and typically hold dowries, spices, or family heirlooms. We returned to Zanzibar for Valentina, where in due form, it was hard to obtain and carry back home. But the reasons have changed over the centuries.

Forget marauding pirates, getting a chest in 2009 involved one aborted landing at the Stone Town airport because the airport's lights went out [??!!], unhelpful immigration officials and merchants hellbent on hard currency (why do merchants no longer seem to want anything to do with Tanzanian shillings?), one very unpleasant round of food poisoning and a couple of noisy nights in Stone Town. We also had to find a way to lug it around and ship it back, and the airline company didn't exactly handle our cargo with the respect such a treasure should warrant.

But what a captivating experience. We bargained at length in a couple of shops but finally settled on a chest being sold by the craftsman himself, one Mr. Firoz of probably Persian descent but a Zanzibari of three generations. He showed us around his workshop and helped us pack it up to withstand the mechanised perils of air travel.

And so we return with an authentic Zanzibar chest and a story to accompany it. Valentina's chest won't hold mysteries, or frankly much in the way of riches. But the story is treasure enough, and there is still room left over for a couple of toys.