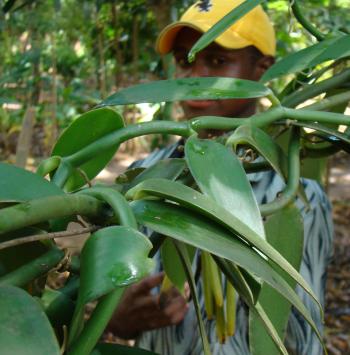 "You will tell me what this is," said Mohammed, our guide. "If you are right, I will congratulate you. If not I will tell you its name." But this time the question was easy: we were standing in front of a vanilla bean vine.

At the center of Zanzibar's east-meets-west allure is its spices, and even the local cuisine showcased the wealth and diversity of spices that are produced by the farmers in Zanzibar's fertile highlands.

We traveled up into the highlands to experience sensory overload firsthand. As we arrived, the glowering sky opened, soaking the soft earth in heavy drops and filling the air with the scent of flowers. The rain lasted only a few moments, and as the sun began to emerge from behind the clouds again the whole farm glistened like Christmas lights.

Zanzibar is one of the world's primary producers of cloves and clove oil, some of which wind up in the spice kitchens of the middle east and India, others of which are dried and rolled into Indonesia's fragrant kretek cigarettes (at once so tempting and so overwhelming when I lived there). Mohammed showed us how they climb the clove trees to harvest the flower buds in woven baskets. The government of Tanzania forbids the sale of cloves on the open market, but buys the cloves at $1.50 a kilo and sells at $15; black market clove sales lead to jail time. And yet enterprising farmers smuggle their cloves across the Zanzibar Strait in wooden dhows to the markets of the mainland.

We saw the unassuming henna plant responsible for the black die Eastern women use to produce gorgeous filigreed tatoos, tasted cinnamon peeled fresh from the tree (it's juicy and surprisingly strong), two kinds of cardamom, yellow turmeric root, ginger leaves, and several kinds of fruit. We also smelled jasmine flowers and discovered a plant we were unfamiliar with: langlang. Its enticing scent was noticeable long before we discovered the plant itself.

The entire time Mohammed led us through the gardens his assistant wove things for us to wear: a necklace for Ericka, a tie for me, then a ring, a headpiece, a bracelet, and finally two hats, Ericka's crowned with a delicate yellow band of trumpet vine flowers.

We surprised Mohammed once, when he led us before a low-growing bush with spiny, dried podlike fruit. He bet us we had never seen anything like it.

"It's achiote," Ericka said immediately. "We use it in Nicaragua." I had an achiote tree growing across from me in El Hato, and its deep red color is used throughout Nicaragua to treat chicken and pork. Mohammed explained in the days of the sultan, Zanzibari women used it to color their lips, a natural cosmetic. We ended the tour with a tasting of 4 kinds of spiced teas produced with spices produced locally. The ginger tea was so strong it made me catch my breath.

Back down in Stone Town we explored the city's narrow alleyways. The cloudburst had washed the city with a breath of cool, clean air. There we would encounter those spices again, this time in coconut curries and spiced kingfish steaks. The second tour of Zanzibar's spices was even more enticing than the first.