Looking back on letters I wrote in 93-94 from Indonesia, what strikes me is the consistency of message that characterizes each one from beginning to end over the course of three or four pages. These days, my emails don't look like that, and I've usually begin thinking about the next message before I've finished composing the first one. But the consistency of my writing is no surprise when I think back to the lifestyle I enjoyed at that point in my life and the environment in which I composed my thoughts and expressed myself on paper. Working in Indonesia at that time, I was blissfully ignorant of the Internet. I lived in a simple house in a Javanese neighborhood overrun with small families, barnyard animals, and wet with the splash of water from the well. I wrote nights on the big wooden table lit by kerosene lamp, with my journal on one side and a big bottle of fountain pen ink on the other. There was no TV, and few distractions except the call of the geckos. I was free to think.

Arranging the time and place to contemplate, compose, and write is my biggest challenge as a writer these days. The Internet is my first challenge: I'm an addict, and must make a Herculean force not to pop off to read some web page, check my mail, or goof off in a dozen different ways, as is my penchant. One professor Polt stated in an NPR interview about typewriter repairmen, "The problem with the computer is partly distraction. You can't check your email on a typewriter." But besides the seduction of the Internet, the modern computing environment is a distraction in itself. Windows is a never ending of pop up windows, alerts, and messages. The wireless network for example alerts me every minute about networks that have faded into or out of range, and in the meantime Outlook flashes every new message that arrives with tedious monotony. MSN can flash you with instant messages as well, plus Skype alerts, messages about my laptop battery, and the river of red underlines that Microsoft Word makes of my typing mistakes.

The Macintosh is a much less distracting environment, but even lovely OS X likes to flash you when it wants your attention. Any modern Linux environment like KDE or Gnome is working as hard as it can't duplicate that experience. The Gnome environment in particular is faithfully copying the mess of Window's alert fest. Only the Linux console is relatively distraction-free, but at the cost of a rather steep learning curve that puts off most modern writers. Fortunately, a growing number of software packages have come on the market to emulate the kerosene-lamp distraction free writing experience I enjoyed in Indonesia (minus the kerosene). With one exception, they tend to be for the Macintosh. This article takes a look at them.

Nostalgia for the simplicity of computing in the pre-internet days led me to reminisce about WordPerfect back in the DOS days. I'm not the only one who took this approach: Commentator Paul Ford delivered a poignant commentary on NPR the same interrupt-driven lifestyle. His solution was to actually reinstall WordPerfect for DOS on his computer. Cool. In my case the search led me instead to a program by the name of Ulysses for the Macintosh, its competition Copywrite, a new product by the name of WriteRoom, and more. All are for the Macintosh, though WriteRoom also offers a Windows equivalent by the name of DarkRoom. More about these below.

I've written before about Copywrite, so I'll preface this section by noting it's the program I finally selected for the Mac and I've enjoyed using it immensely when writing fiction or long memoirs. Copywrite provides a great interface for writing scraps of text - chapters, vignettes, snippets of dialogue, etc. - and then combining, separating, sorting, reverting to previously-saved versions, and exporting. Best of all, Copywrite provides a full screen mode in which the rest of your desktop, icons, alerts, and all - disappear, allowing you to concentrate on your writing in a blissfully distraction-free environment. This is surprisingly seductive to a writer.

Ulysses is similar. The folks that created Ulysses claim to have invented full-screen mode and then suffered as their competition copied the feature. If that's true I am immensely grateful. Ulysses' biggest advantage, in my opinion, is that its native formats are plain text and RTF. As a Unix junkie and an open-formats zealot, that means a lot to me. Copywrite makes up for it (barely) by facilitating easy export to RTF, which is better than nothing. Ulysses is expensive though, at $100 to Copywrite's $30. Like Copywrite, Ulysses facilitates the writing, rewriting, and reiterative organizing of bits of text that eventually fall into place as your masterpiece. 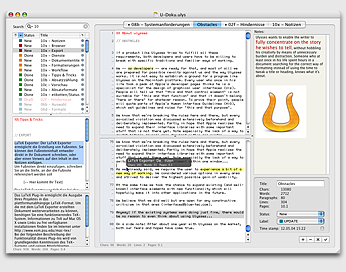 Compared to these two giants, WriteRoom is rather spartan. WriteRoom's first advantage is that it is distributed free, and developed using an interesting hybrid open-source model that incorporates a community input process. That gives the casual user greater voice in the incorporation of new features. When you start WriteRoom a small, black window appears in which you can input your text; press command-escape and the window goes full screen. Type away, save, and then export to a text file. WriteRoom has almost no editing features other than cut, copy, and paste, but for many, that's enough. Neither does it deal with multiple files. It's simply a big black, distraction-free screen. 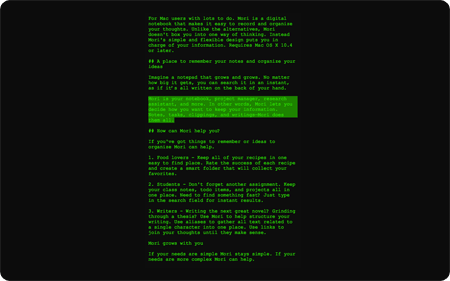 Had I not discovered the remarkable versioning and organizing features of Copywrite, that might have been enough for me, but now I can't live without them. However, Hogs Bay software, makers of Write Room, offer the same product on the Windows platform by the name of Dark Room. It has the same limited feature set as WriteRoom but deftly wipes away the constant pop-up window, error message, screaming-for-attention experience that is Windows. Letting Dark Room reduce the Windows world to a single blank page that lets a writer write is a lovely thing.

Interestingly, the Hogbay website states "There's emacs, but why learn all those complicated keystrokes?" When I'm working on my Linux computer that's often exactly what I do: run emacs on the console, and I have the luxury of writing with the world's best text editor in a distraction-free environment. In a way, Linux, by stubbornly retaining the console environment in addition to a graphical one, has retained the immersive, distraction-free environment so conducive to writing. And emacs, by linking to powerful software extensions provides as much power as WordPerfect ever did, minus the formatting. In fact, what I like about Copywrite and friends is that they imitate (and graphically, surpass) the Linux console experience.

Finally, Blockwriter doesn't yet exist, but its stated design is to replicate a typewriter. That means no backspace, your network connection is blocked while you use it, and most other editing commands familiar to modern computer users are removed." Text editing without the editing" is their slogan. This would drive me bonkers, but I can appreciate the vision that has driven them to produce it .

Computers are so much more powerful than they were a decade ago, but in some ways we have complicated the interfaces to the point where it's gotten hard to concentrate, and doubly so if you write while you're connected to the Internet. Fortunately there is an increasing number of alternatives that duplicate the simplicity of times past. Add the kerosene lamp and fountain pen for bonus points, and move to a tropical country if you think it will help.

Note: DOS 5.1 Screenshot courtesy of Edward Mendelson at Columbia University. Professor Mendelson is perhaps the biggest fan of WordPerfect 5.1 for DOS I've ever encountered, and his web page is invaluable.