I had been wondering why castles and stories of knights and princesses so thoroughly captivate the kids, and decided it’s probably simply because such an industry has come up around those stories, and there’s so much money to be made. Then we visited Carcassonne and I decided there’s something else.

Neither Ericka nor I is a stranger to castles, having visited many over the past decade. But Carcassonne was captivating in ways that extended beyond the crenelated ramparts. I think it may have been the geography: from the streets of modern Carcassonne you travel outside the city limits, crossing a grassy plain to where the medieval fortress sits perched on a little hillock with a perfect view of the surrounding countryside. Never mind you’re traveling to the city gates in a 2012 Peugeot taxi blasting pop tunes through Bluetooth speakers, as you approach the city gates you’re horseback, wearing heavy leather boots and carrying a weapon of forged iron. And then you are there, on the outside looking in, separated from the inner sanctum of the walled city by a moat (now dry and grassy), and a real, many-ton drawbridge. Carcassonne.

Carcassonne is a UNESCO site, valued because it is such an excellent example of a medieval fortified town. Occupied since the Neolithic era (centuries before Christ), the walled city grew over time in response to invasion by Goths, Franks, and Arabs. It's most famous for its role as a refuge to the Cathars during the 13th century Albigensian Crusades. And as far as I could tell, it's currently holding up pretty well to a siege of international tourists. I was less interested in the history than its beauty, because it was a treat for the eyes. 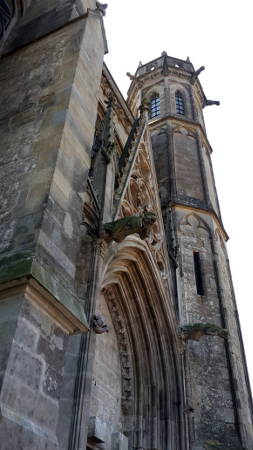 We wandered the city streets for the better part of the morning, which ran thick with the smells of meaty stews and heavy bread. I went from shop window to shop window admiring pocket knives I could neither justify nor carry back on the plane in my luggage, and the kids bought wooden bows and arrows, and a toy, wooden boat. Then we stepped into the cathedral for a glimpse of the interior. Such good fortune! There was a male quartet performing a Capella Latin pieces, and the baritone reverberated beautifully against the cold, stone interior. They were Doros, a Russian vocal ensemble, and they’d sold me two disks of their performances before we’d departed. Their voices carried me back to another era: of touring Western Europe with the Cornell Glee Club, focused not on improving the lives of the rural poor but with university studies and romance and memorizing the Latin of songs written and performed centuries before.

I left remembering the words of Isak Dineson, who wrote the Lord made the earth round so you couldn't see too far into the future and know what’s coming next. Had someone pulled aside that 20 year old Second Tenor and informed him that he’d spend most of the next twenty years living in Latin America and Africa, and would return to Western Europe with two kids in hand who would be every bit as thrilled by the land of medieval castles as he, it would have sounded like folly. It’s fun to reminisce on the past. But it’s fun to think about the future, too. Who’s to say in some barbarous future we won’t once again be driven to living in walled fortresses to keep out the enemy? If that’s the case, I hope the soundtrack to our lives sounds something like Doros.