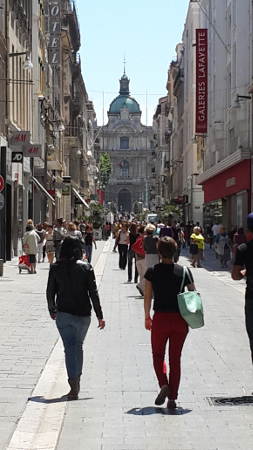 In grad school we studied at length the topic of economic convergence, where given freedom of labor movement and transport of materials, wages and economic conditions gradually meet in the middle, like high and low waters finding middle ground as the barrier falls. Agree with that theory or not, head directly to Marseille to have a look at what that might look like.

We visited Marseille in early summer, but already it was sweltering with Mediterranean heat; the air was humid and the sun seared, especially towards evening when its reflection off the harbor was nearly blinding. Hotter still was the metro, which was packed, nearly airless, and absolutely teeming with throngs and throngs of commuters. Suffocating, we curtailed our cross-town trip and made for the exits, where we caught one of the above-ground tramways plying the same route.

The architecture was French, that’s for sure. But it was a polyglot city full of Syrians, Libyans, Lebanese, Algerians, and beyond. I was disappointed to hear Wolof more than once, having looked forward instead to a break from the Senegalese. Blame it on the fact that we were near the end of the trip, and were running out of steam. But I found Marseille to be “too much.” We looked forward to taking the kids to the one park reputed to have a swingset and some toys. Instead we found it vandalised, threadbare, and dilapidated. Disappointed, we retreated to a cafe for some pastries and juice, and got ready to say goodbye.

We’d been wondering, at some level, if we’d be able to make Marseille our home as a base for further adventures in Europe and Africa. But we decided, no. And that makes me worry about economic convergence. There are other cities economists point to as models of what the world would look like if economic levels converged. Lagos, Nigeria is one: I’d rather die. Beijing is another: I’m not impressed. After decades of working and living in the “developing world” –much of which isn’t making any effort to develop whatsoever – I’m convinced fences make for good neighbors, economists be damned.