Check out our feature article in the current news stand edition of Transitions Abroad magazine (November/December Responsible Travel Issue). "Nicaragua's Evolution" by Randall Wood and Joshua Berman starts on page 38, and begins with the first line of our book: "Forget everything you thought you knew about Nicaragua."

Like what you see? Buy the book and schedule a trip for yourself.

Also check out our interview back in the May/June issue.

Moon Handbook Nicaragua has won the "Best Travel Guidebook" award over at Peace Corps Writers. That's a huge honor for us and a huge honor for the book, which has been selling well since it was published in spring 2006.

You may visit the book's official web page: www.moon.com/catalog2/nicaragua.html, or see what other travelers are saying over at our forum, GotoNicaragua Forum.

I am very happy to announce the launch of a very special project Josue and I have been working on all summer. It's www.gotonicaragua.com, a website devoted to living in and traveling through Nicaragua.

The site is a very focused effort on gathering and hosting a community of thoughtful and socially conscious travelers and would-be expats, encouraging conversation, tip sharing, and commentary on Nicaragua. Josh Berman and I, authors of Moon Nicaragua and Moon Living Abroad in Nicaragua, are the hosts and sponsors. Continue reading "Go To Nicaragua!" 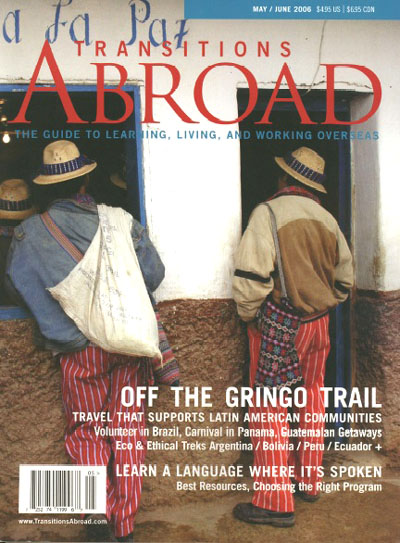 Randy Wood and Joshua Berman were interviewed in Transitions Abroad magazine. Find it on page 14 of the May-June edition.

The interview is a republished version of the interview John Coyne did with us for Peace Corps Writers back in January 2006. This one is a bit condensed but will reach a far broader audience. The Transitions Abroad website receives nearly 2.5 millions distinct visitors per year and 12,000 copies of the print version are distributed monthly. Many thanks to John Coyne and to Transitions Abroad for their interest in little'ole us!

On 27 February 2006 I spoke to a group from American University's Alternative Spring Break program. They were bound for a one week trip to Nicaragua in early March 2006 to visit Managua, Leon, and Chacaraseca. We discussed CAFTA, America's media portrayal of Nicaragua since the revolutionary years, and some itineraries for exploration. Continue reading "Randy Wood at American University Feb 06" 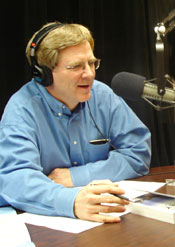 Rick Steves is a legend in the field of travel and travel writing. Not only is he a colleague of mine at Avalon Travel Publishing where his series of travel guidebooks to Europe and elsewhere are a huge hit, but he now has his own TV show, a radio program, and a very popular podcast. Rick interviewed me on 24 February 2006 with regard to Nicaragua, tourism, and adventure travel.

The interview will be broadcast on all the radio stations that subscribe to the program, but you can download the podcast here. On 13 January 2006, I met the 40th group of Peace Corps volunteers to arrive in Nicaragua for service. They were fresh off the plane and eager to begin the training period that launches the 27 months of their service to Nicaragua.
Continue reading "Randy Speaks to Peace Corps Nicaragua Group 40" 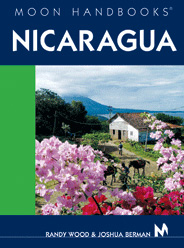 The Moon Handbook to Nicaragua was a bigger hit than any of us ever imagined. The first edition, published in 2003, was expected to sell about 8000 copies; instead it sold over 18,000. The second edition, published in November 2006, sold over 2000 copies in the first two months it was on the shelves. Here's where you can purchase it. Continue reading "Where to Find the Book"

On Saturday, 14 January 2006 a crowd of about 40 expats, travelers, and interested Peace Corps volunteers gathered at the Casa San Francisco in Granada to hear me speak about Nicaragua, writing, real estate, and politics. Afterwards I hung around to sign a few books and chat with some of the audience over a cold Toña.

The October edition of the Nica Times ran a two page article by the name of Positive Tourism Trends Expected to Continue.

Besides discussing the recent policy trends that will help stimulate investment in Nicaragua - like the much awaited Coastal Law - the article looks at how radically tourism is shaping the Nicaraguan economy and how fundamental tourism will be for future Nicaraguan growth.

The article ran with a photo of Maria Rivas, director of Nicaragua's Ministry of Tourism, reading a copy of Moon Handbooks: Nicaragua. Might we compliment her on her exceedingly good taste? We are optimistic too.

I'm happy to announce that Living Abroad in Nicaragua, Joshua Berman's and my second book about Nicaragua, and a fresh new look at how to live, invest, and settle down in Nicaragua, has been published and is now on the shelves of major bookstores. As always, this book was a labor of love about a country we both feel strongly about. It is the companion volume to Moon Handbook Nicaragua and we hope it sets a new precedent for writing about living, investing, and finding your way around Nicaragua.

The Antezano Radio show, broadcast in Portland Oregon on KPAM 860 AM, interviewed me with regard to Moon Handbook: Nicaragua (2nd edition). Listen for it Saturday 17 December at 8AM PST or download it from the KPAM website (www.kpam.com).

The interview covers the radical developments in Nicaragua's nascent tourist industry, travel tips, what makes the south so different from the north, and what travelers to Nicaragua should do to stay safe and healthy. The latter is an easy topic to cover, as Nicaragua remains safer than any American city.

Kudos to the good folks at Avalon Travel Publishing who set up this great opportunity to spread the word.

I'm happy to report the 2nd edition of our best selling guidebook to Nicaragua, Moon:Nicaragua, is now on the shelves of major bookstores around the nation, including Barnes and Noble, Borders Bookstore, and others, not to mention online at Amazon.com.

In early spring of 2005 I was approached by the SAIS registrar's office to see if I would participate in a promotional video for the university. After several afternoons of filming and countless hours of editing and production work by the crew at Dorst Mediaworks, I'm proud to point you to the final product.


Check out the folks at Dorst Mediaworks here.