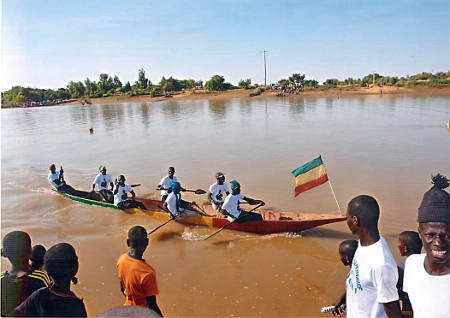 The brightly dressed men on horseback caught my attention first, but then I saw the man leading a camel to the front of the stage.

I was in dusty Ndioum, in northern Senegal, for work-related matters. The sun was high overhead the Sahel, and there was dust in the air. I've spent a lot of time here, and I find it fascinating, because it's so different from anything I've ever experienced, and I wonder how people make their living here. We were getting ready to break ground on a new bridge. Continue reading "The Bridge at Ndioum" 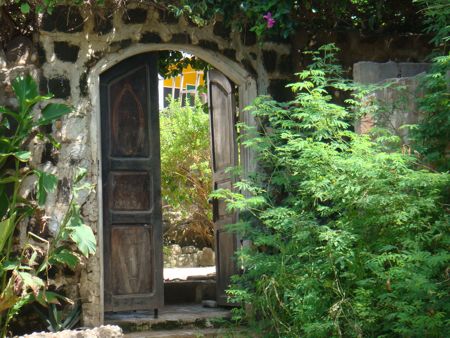 A garden gate, a rough-hewn door cut from recently-felled hardwood, set in a garden wall of volcanic stone, whose untended garden threatens to overwhelm it and revert the whole place back to Africa. This is why we travel. Continue reading "The Garden Gate" 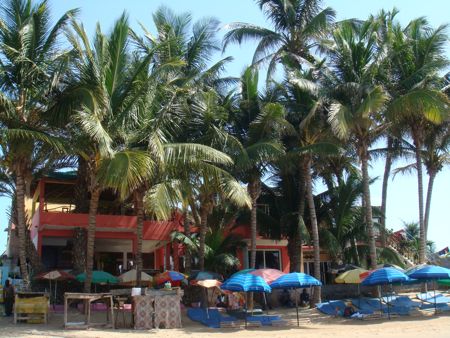 Ask Valentina and Diego where they want to go on a Saturday morning and they'll have no trouble at all answering: Treasure Island! Smart kids: that's where I want to go, too. Continue reading "Treasure Island (Île de Ngor)" 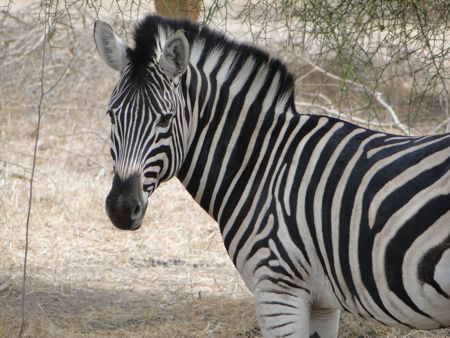 West Africa in fact has its share of opportunities to view big game (for the record, East Africa has its share of anthropological attractions too; was it even necessary to mention?). In Benin we discovered Pendjari Park at the north extreme of the country (where we even saw a lion!), and on the Niger-Burkina Faso border is a reserve of West Africa's remaining indigenous giraffe population.

Senegal, too has a wildlife reserve, by the name of Bandia. Here are some pictures from our expedition: Continue reading "Bandia" 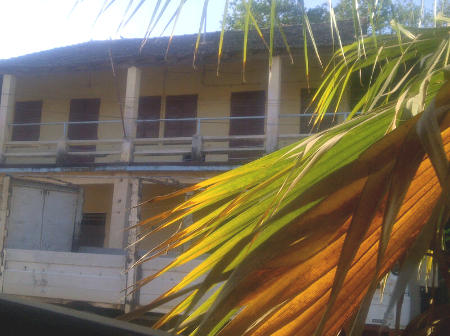 The riverfront is commanded by an imposing set of concrete wharfs where the fishing boats offload their catch and where the Senegalese military maintains part of its flotilla for patrolling the Atlantic. Flocks of graceful cranes skim a few meters of the river water, white with black wing tips. In the afternoon light, they wade at the water's edge, picking in the grass. But the town itself, rows of two story stucco homes in colonial architecture and tiled roofs, shadowed by coconut palms and fronds of bougainvillea, does a brisk regional trade in the usual goods. Continue reading "Ziguinchor, Gateway to the Casamance" 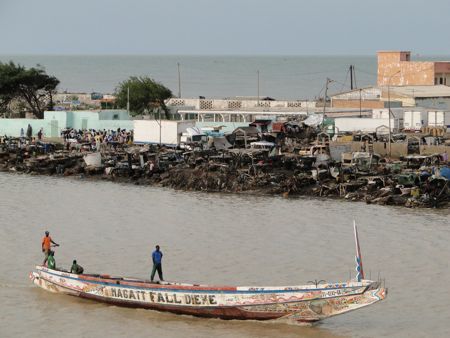 Saint Louis, former capital of French West Africa, boasts a splendor still evident in the old buildings, the 19th century French colonial architecture of long eaves, gabled verandas, and tiled roofs; the stuccoed buildings' color remain the paint box of the tropics. And the music and art remain. Run down but likable, its charm is unmistakable, an island nestled between the shores of the broad, chocolaty Saint Louis River, and a fitting melange of cultures, aesthetics, and traditions. Continue reading "Colorful Saint Louis, Senegal" 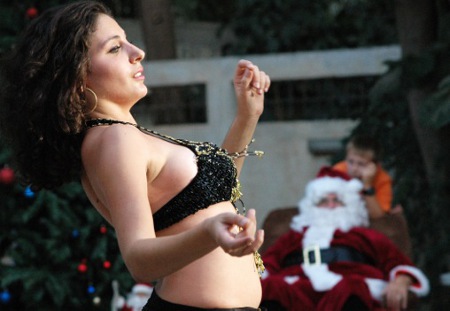 We live in Sub-Saharan Africa, where the largest socio-economic minority is the Lebanese, some of whom work with or for the American community. Put that together and what do you get for Christmas? Santa Claus enjoying a cold beer at the Christmas celebration, while watching the Belly Dance troupe shimmy. Awesome. It's Christmas in Dakar! Continue reading "Christmas in Dakar" 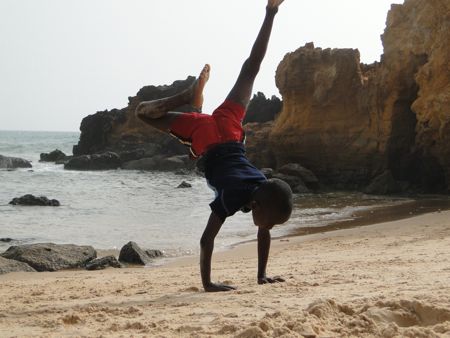 Ostensibly luxurious hotels offer deep pools and carefully manicured garden borders, fishing excursions into the deep waters off the coast for Marlin, massage with essential oils, henna treatments, and gift shops full of neat little things. The dozen or so hotels that have set up shop along the long, placid coastline south of Dakar all vie with each other for "correctness" and quality of restaurant. They're nice enough, and comfortable. But I had the pleasure of traveling to the Petite Côte in the company of several dozen well-educated African colleagues, and was able to see the place through their eyes. And I learned more about France and the French than I did about Africa that weekend. Continue reading "La Petite Côte of Senegal"

Senegal has lovely, wondrous birds, and enough sky to fit them all in. On the most mundane day you can expect to see hundred of whirling kites, crows, and gulls, and when the wind is still the treetops are full of feathered friends of all types.

Here are some notes from my field book. Continue reading "The Birds of Senegal" 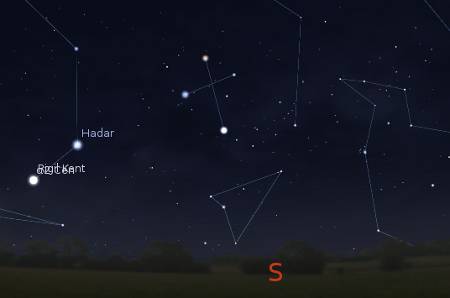 Hardly a day goes by that the electrical current doesn't snap to a halt, the diesel generator grinds into action, and the lights flicker. When it's not a full-blown outage, there are endless power surges, dips, brown-outs, spikes, and worse. Some days we don't even bother to turn on sensitive equipment like computers, and even then the computer is plugged into a battery backup, surge protector, and voltage regulator. But there are good reasons to leave the lights off and go outside. Just look up. Continue reading "Lights Out in Dakar" 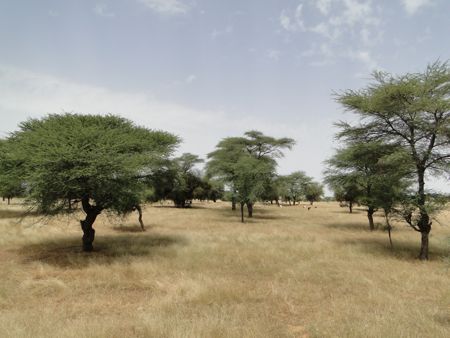 We left the colonial city of Saint Louis in the early hours of morning, passing blue-uniformed school kids and shopkeepers washing down their front steps. Putting the town behind us we crossed the river to the mainland, and spent the rest of the day traveling along the broad arch of the Senegal River along a track that led us eastward, deep into Africa's Sahel. I'd approached this gorgeous region once before from northern Benin, but this time, it was different.

At the tail end of the rainy season the Sahel was verdant and lush, and the hillsides were carpeted in a soft patina of tall, tufted grass that rolled in waves towards the horizon. A rash of stubby acacia trees dotted the landscape, dark compound leaves thrust against the bright sky; underneath them, pooled in the shadows, lazed the goats and sheep that made up the local economy. Continue reading "Grasslands of the Sahel" 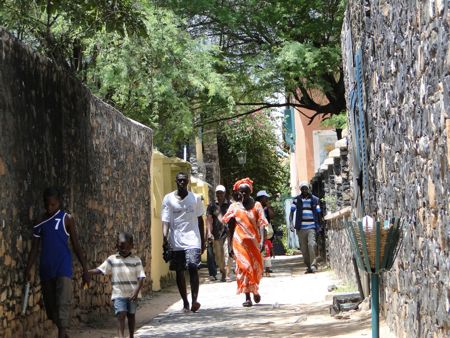 As we boarded the ferry that crossed the channel, my first thought was, how convenient: an islet off the coast just far enough to prevent captured Africans from swimming to freedom. But they'd make it, perhaps. Gorée is the shape of the African continent itself, with a thickened section and a tail that curves around a shallow harbor, and therefore somehow emblematic of the continent in all its forms. No sooner had our boat approached the dock then the colors leapt out at us: the turquoise of the mid-morning sea, and the muted shades of the little homes at waterside. The island once housed little more than the slave castle where slaves waited in misery for the next westbound trans-Atlantic brig, and a couple of administrative buildings. But these days it's home to an evocative little village of colorful adobe buildings set alongside sandy island streets. Continue reading "Île de Gorée" 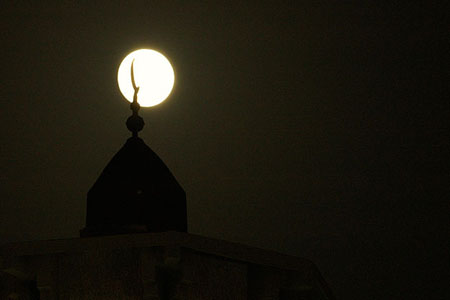 A rainy Sunday in Dakar, just a day after Eid al Fitr, the end of the Muslim period of fasting and the 9th anniversary of Nine-Eleven. What a juxtaposition of worlds. It's been fascinating to experience Ramadan in Senegal.

Senegal is a country that's over 80% Muslim. Though I must have experienced it in Indonesia as well, it either didn't strike me or I just don't remember it. But in the Muslim countries of West Africa, there's no missing it. Continue reading "Ramadan in Dakar" 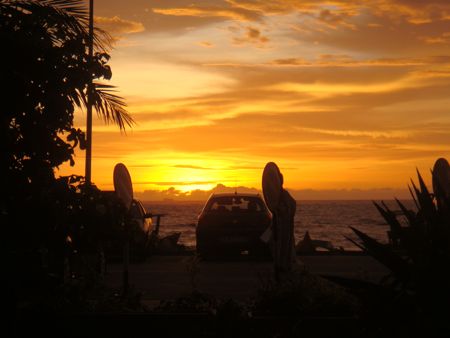 For as long as I've looked at the "Africa" plate in the atlas, Senegal has drawn my attention, and in particular, that point in Dakar where the land stretches westward into the Atlantic, drawn into a point. It's the Presqu'Ile of Cap Vert, better known as Dakar, and it's as far west as you can go on the continent of Africa. It's the end of the world, or the beginning. Continue reading "Almadies: the Westernmost Point in Africa"

I've had animals around to greet me everywhere I've ever lived, from owls in Pennsylvania to lizards in Benin. But as we settled into our new home in Dakar, Senegal, somebody extra special was waiting for us in the branches of a pine tree behind our home. Continue reading "Feathered Friends in Senegal"