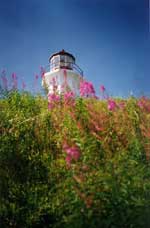 The adventure began with a map. All the best ones do. All the maps of America I’d grown up with had shown Maine as the northeastern terminus of land, the limits of civilization, the promontory from which you could look out over the cold waters of the North Atlantic. And maps of North America showed Canada and the United States in such a way that the sheer mass of Quebec overshadowed the land north of Maine. But “Atlas Plate 20: Eastern Canada, May 1967” made me catch my breath.

North of Maine and New Brunswick extended a shoulder of land I’d never noticed before. Planed smooth along its north edge by the cold waters of the St. Lawrence River, the Gaspé Peninsula jutted out into the immense Gulf of St. Lawrence. The stony Notre Dame Mountains made up its tough interior, and as they folded down towards the rich agricultural plains that lined the water’s edge, they rumpled into one last organized range, the wonderfully-named Shickshock Mountains.

The St. Lawrence could hardly be called a river for the length of the Gaspé Peninsula. After pouring past the gates of Quebec City, the north and south shores of the St. Lawrence parted, and the flood waters became a deep, angular bay, and beyond Anticosti Island, which sat midstream like a cork jettisoned from a bottle, became the deep Gulf of Saint Lawrence. Gaspé was enigmatic, a layer of icing on the thick cake of New Brunswick and Maine, a bold tongue of land defined by Chaleur bay to the south and the River on the other side. It was the unassuming entrance to the Great Lakes, separate from the immense Quebecois northlands, but equally isolated from the United States.

My eye followed the river to its extreme outlet, and traced the outline of Gaspé Passage to another marvel: Île Bonaventure, an infinitesimal speck of land cast off from the mainland at a place called Percé. What was it like to look out over the water from the end of so magnificent a peninsula? I resolved to travel there immediately to find out.

I left Boston in the darkness of early morning, bolstered by dark coffee and the thrill of the open highway, thundered northward through the White Mountains and along the edge of streams that ran cool with the waters of early autumn. In front of me lie adventure and freedom and the unknown. The sky broke open at intervals, drenching the road, my truck, and the forest around me; the entire day passed in that fashion: downpour, hot, blue sky, deluge, sun. By late morning I was at First Connecticut Lake and the cabin of an old, dear friend. I found him upstairs, writing a book. We chatted briefly and he fixed some stew, then prayed over it, “Lord, thank you for the gift of friendship and the surprises it brings. Thank you for the earth’s ability to sustain us.” I admired the starkness of everything, and by extension, the sincerity. 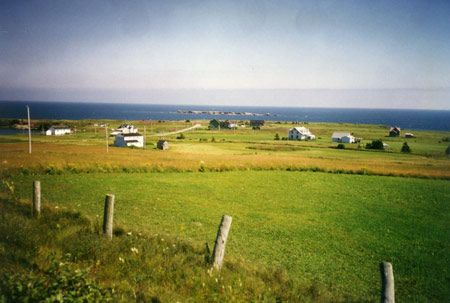 The Canadian border north of New Hampshire corresponds with a precipice of sorts; it’s the most dramatic border crossing I’ve ever experienced on four continents. A bored looking patrolman stamped my passport (probably just for fun, since it wasn’t required), wished me “bienvenue,” and I rocketed over the edge and down into the valleys of the Montérégie, Canada’s deep Quebecois farmland.

Passing flotillas of clouds mottled the hillsides as I drifted past the tailings of the Thetford Mines, which pressed cold granite against the Canadian sky. The earth’s innards made a more brutal contrast with the little town which cowered beneath it, half the size of the debris, and so much less permanent. The joy of the traveler is meeting and growing to understand the people among whom your road threads, but the paradoxical drawback is the call of the road, which draws you deeper into the countryside at the expense of time enough to get to learn the ways of the land. But I found the Quebecois to be chatty and amiable, and they enjoyed my French as much as I enjoyed the words they taught me. Northern people have a reputation for being aloof, but I found without fail that if I made any attempt at all to be pleasant they would engage me with all their attention. But it was the Saint Lawrence that drew my attention equally.

I pulled up alongside the river’s southern flank, and over the next few days I followed it from its headwaters under the ramparts of Ville Québec to its outlet in the Gulf of Saint Lawrence, pressing northward against the hard spine of the Chic-Choc mountains and in the shadow of the even mightier Laurentians on the river’s other side. Gaspésie was an easy place to like. It has a rough hard edge visible even in late summer. The fields look like the dark pine forests could reclaim them at any time; the shoreline is a tumble of hard granite boulders, and the houses are built tight and warm. The river broadened as I followed it down towards the sea; by my second day only the tips of the Laurentians betrayed the far side of the river, which could easily have been a sea, for all its appearances.

The small stops I made along the way warmed me to the people of the Gaspésie. I bought warm bread from an astonishingly beautiful young woman who surprised my vocabulary right out of me. It is somehow more astonishing to find beauty in hard places, when beauty and ease of access are in no way correlated. In Montmagny I visited a center that celebrated the annual passage of millions of snow geese bound southward for Lancaster Pennsylvania and beyond. In Trois Pistoles I visited a three story barn full of old cars from the 20th century. They dated from old Model-Ts up through the 1940s, and emphasized what I had already come to appreciate: south of the Saint Lawrence, time passes slowly and deliberately, and life is so palpable you can taste it.

Gently, the mountains began to press against the shoreline, and the road became a salted ribbon between the sea and the forest. Fingers of early morning fog reached in from the water and snaked up the hillsides. The fog silently explained the life of the Gaspé fishermen, who spent long hours sailing cold waters at great danger to themselves. When they die, they die alone, and in silence. Pictures I saw in restaurants of the peninsula during the winter were terrifying in their severity: sea ice tumbled in blocks higher than houses, stark whiteness over the horizon, snow piled up deep. Humanity is precarious everywhere, but you notice it best at the edges of civilization, where the raw natural landscape emphasizes just how little it would take to push us off the face of this earth. 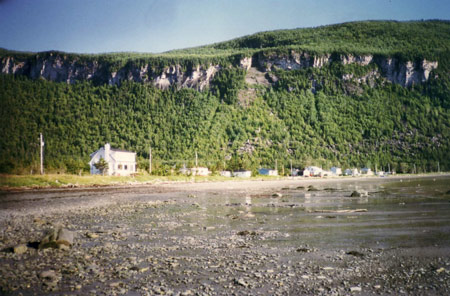 The villages grew smaller and more sparse as the land turned outward into the bay and eventually southward. At the tip of Gaspé I had reached Cap Forillón (also known as Cap des Rosiers), where the Appalachian mountains finally plunge into the sea, and where the rhythm of the sea dictated the mood. Montauk Point, one of my favorite stomping grounds, is a suitable end of the world, but nowhere had I seen such a vaulting, tremendous, and abrupt conclusion to the landscape as I did at Forillón. I camped in the hillside at land’s end, where a sliver of a peninsula prodded the Saint Lawrence current for the last time. I had reached Cap Bon-Ami, which was draped in scarlet Loosestrife and wildflowers whose names I did not know. Summer was waning fast, but while it lasted the peninsula’s wildlife joined me in celebration. We all felt the same thing: that when winter came the long nights would be hard and the wind fierce. Summer was for living.

My journey had not ended, though the North American continent had. I slept in my tent that night under wool blankets, but left my head out in the open so I could watch the stars fall. Beyond the chirping of the crickets, only the sound of the wind broke the silence of the night. In the morning I would cross a couple miles of the sea whose waves were breaking against the rocks below me, and visit the island at the end of the continent.