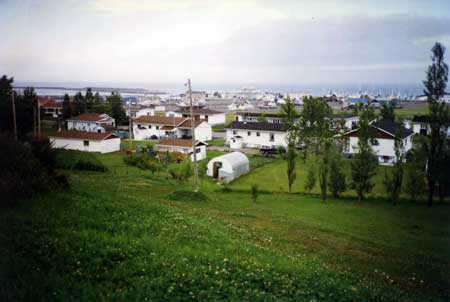 The inter-island ferry deposited me on the docks in late afternoon, and I had to scramble to find a campsite and set up my tent before night fell. Clouds had rolled in from the ocean on a wet wind and the temperature was dropping. "It's not the temperature," everyone told me, "it's the wind." I got my first sense of just what they meant that first night in my sleeping bag, when my little tent was buffeted by winds that would have carried it out to sea had I not been lying inside. The Mi'qmak Indians got it right centuries ago when they named the place "Menagoesenog," the Windswept Islands.

August 28, 1997: I reluctantly decided not to spend more time exploring the massive Baie des Chaleurs and instead breezed along its rocky edge, crossing at Pointe a la Crois into Campbelton, New Brunswick, and made my way towards something that had enticed me since the moment I first noticed it on the map: Les Îles de la Madeleine. And there was no time to lose: summer was drawing to a close. Traversing New Brunswick I first felt the creeping fingers of autumn encroaching up the roadsides. People everywhere in the north spoke of autumn like a precipice over which one must inevitably and terrifyingly fall. "Once you see the goldenrod in the fields, you know summer's over," groaned the naturalist. "Once the temperature begins to drop it all happens pretty quickly," said the shop clerk. But when did that start to happen? "Oh, the first week of September or so." That was only a week away.

So I pressed hard to get to where I was going, and at day's end I camped at the eastern tip of Prince Edward Island under a night sky pricked by starlight and buffeted by a wind that approached a gale. From my grassy tent site I could peer through the hundred foot strand of pines that lined the edge of the island over the watery horizon, while waves broke hundreds of feet below me at the foot of a rocky cliff. The wind raked the sea into combers that piled up on the shore, whipping up a sound that was unnerving. Just over the horizon and well behind the storm clouds lay the islands in the middle of nowhere, the fulcrum of the mighty Saint Lawrence, the Madeleine islands.

Looking at the vehicles streaming onto and off of the enormous ferry that took me across the Gulf of Saint Lawrence confirmed what I suspected, that ninety percent of the visitors to the Madeleine Islands are Quebecois. In fact I didn't see another American the entire time I traipsed across the windblown islands that made up the Madeleines. And for a decent part of the year the Madeleines don't get any visitors at all. They're remote: regular boat service ends sometime in January when the sea clogs with ice, and then only twice a week does an icebreaker from Matane (on the Gaspé peninsula) bring perishables, and I presume, mail. The locals told me stories about the winter of 1910, when the islands' underwater cable separated and the Madelinots (as the locals call themselves) were forced to send their mail over to the mainland via a wooden barrel with a sail attached to it. It was hard to imagine life in such isolation, and harder still in this age of the Internet. Such isolation however is nothing new to the locals. The Madelinots have long been used to living with ice, and in the daring way of most islanders, they almost revel in their isolation and the challenges posed by their remoteness. I understood them completely. With isolation comes beauty and a comprehension of nature long lost elsewhere. The Madeleine Islands still provide habitat for plenty of Gray and Harp Seals, and as recently as the last century they housed Walrus as well. And on all sides one faces the long horizon and the endless wind.

The inter-island ferry deposited me on the docks in late afternoon, and I had to scramble to find a campsite and set up my tent before night fell. Clouds had rolled in from the ocean on a wet wind and the temperature was dropping. "It's not the temperature," everyone told me, "it's the wind." I got my first sense of just what they meant that first night in my sleeping bag, when my little tent was buffeted by winds that would have carried it out to sea had I not been lying inside. The Mi'qmak Indians got it right centuries ago when they named the place "Menagoesenog," the Windswept Islands. {mosimage}

At daybreak the winds gave way to squalls of cold rain that passed over the island in waves, soaking me and all my possessions as I pedaled my rented bicycle around the country roads. "You can never escape the rain," a kindly shopkeeper comforted me in Cap aux Meules as I dried off in front of his counter, "there's always a little, here in the Magdalens."

The beach at Cap aux Mueles was desolate and foretold winter: sharp black rocks jutted from the sea, and a strong north wind threw waves upon the shore. Scholars estimate the number of shipwrecks off this coast to be between 700 and 1000.

I was watching the shoreline through my binoculars to see if I could locate any species unfamiliar to me back in the States when I bumped into a trio of Quebecoise women on a long-distance bike ride from Montreal. They recognized my Peterson's bird guide immediately and laughing, pulled the French version of the same book from a backpack. We compared the two side by side, noting the English and French translations for birds we both knew in our own languages, like "Sterne" for "Tern" (a bird close to my heart). Birds cross linguistic barriers as effortlessly as they do political ones.

In spite of the inclement weather I found the people to be friendly and upbeat, not dour folks with dampened spirits. And even though I got wet, the gorgeous landscape made my heart race. I made a few friends before leaving, and heard the same questions I'd heard in Indonesia and on every other small, remote island I'd ever had the pleasure of visiting: "Where are those places? Are they near? What language do they speak?" and "how much do things cost?" With isolation comes the luxury of the privacy of your own thoughts, but with it comes a yearning for what lies beyond the shoreline, the breaking waves, and the autumn wind.

I slept deeply the night before I returned back to the mainland, the product perhaps of the more secluded camping site I'd chosen, or perhaps the result of the exhaustion of a day's pedaling through the hinterlands. I boarded the MV Inishturk and returned to the mainland with regret. It would be too long before I returned to such a lovely isle, and there was so much left to see. But the autumn winds were blowing me home, and cold winter would soon be upon us.