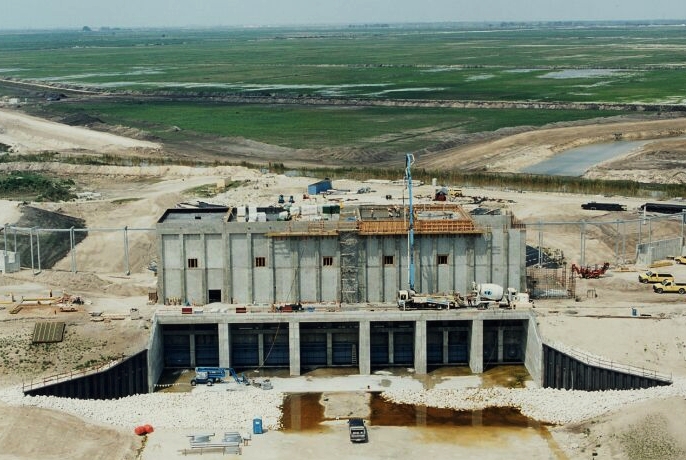 I spent 2002 and 2003 working on the Corps of Engineers' ambitious Everglades Restoration Project, as a Construction Representative at Pump Station 362. It's part of a massive effort to improve the chemical characteristics of the stormwater inflow to the Everglades from the Loxahatchee area. The following are some thoughts on the Everglades and some pics of the wildlife that shared my workspace while I was there.

Since rising from the prehistoric Atlantic Ocean in the Miocene epoch (25 MYA), the drainage of fresh surface water has typically been towards the magnificent Lake Okeechobee and southwest through the estuarine Everglades to the Gulf of Mexico. There, the boundary between land and sea is evanescent, and the mineral-poor waters of the Everglades nurture grass species and the animal life that has come to depend on it

That drainage pattern was irrecoverably altered a century ago when American settlers began to develop and farm southern Florida. The annual flood cycle became a nuisance and a human hazard; that was made clear in 1926 and 1928, when hurricanes caused Lake Okeechobee to rise and overflow its banks, drowning hundreds and occasioning millions of dollars in damage. The settlers called upon the American government to do something about it. President Herbert Hoover responded. The government channelized much of the flow through canals that led the fresh water out to sea, drying up the land for production of oranges and sugar cane, and allowing further settlement and development of the now densely populated south Florida.

But the Everglades paid the price of human development. Deprived of its normal inflow of freshwater and inundated instead with nitrogen- and phosphorus-laden discharge, the plant composition of the Everglades changed as non-native species crowded out the indigenous plantlife. The change in flora induced a subsequent change in wildlife species.

It became a national priority to restore the Everglades to their former splendor, which was no small challenge in light of the agricultural and human settlements that had been established in reclaimed Everglades lands. How to restore the wild areas without swamping the residents and ruining industry?

Enter the CERP, the Comprehensive Everglades Restoration Program. It's a 30 billion dollar project, whose costs are shared between the federal government and the state of Florida. It has 68 major components and over 40 individual projects, to be completed over the course of 30 years. Nothing this vast has ever been attempted. The Corps of Engineers plays a principal role in the CERP. In brief, the CERP intends to strike a delicate compromise between the human communities living on reclaimed land, and the Everglades, redirecting freshwater to the Everglades to the greatest extent possible. The result is less freshwater pollutant in the bays, and more nutrient-poor water for the Everglades. That requires a massive investment in infrastructure to channelize, treat, and redirect the fresh water.

I spent 2002 and 2003 working on the Corps of Engineers' ambitious Everglades Restoration Project, as a Construction Representative at Pump Station 362. It's part of a massive effort to improve the chemical characteristics of the stormwater inflow to the Everglades from the Loxahatchee area. Water enters by means of a pump station similar to this one, where it flows through broad flat treatment cells in which specific aquatic plant species are growing and absorbing nitrogen, phosphorus, and other nutrients. The water, now clean and largely sediment-free, exits through PS 362 where it is pumped into the Loxahatchee Wildlife Refuge.

There are two benefits to South Florida's ecosystem. The fresh water is no longer pumped out to the Intracoastal Waterway, where it's largely considered a pollutant to a saltwater ecosystem. Instead it's channeled back into the upper part of what was once the Everglades.

All that benevolence doesn't come cheaply. PS 362 and its twin were built at around $20M each, and the total cost of the project exceeds $50M. Is it worth it? I think so. South Florida's unrestrained development means the open space and ecological health of the Everglades provide a little breathing room for everyone.

Florida's greatest treasure is the Everglades National Park. But many of Florida's more visible fauna could be found in our own backyard.

This is my personal recollection of the time I spent in Florida and the work I was involved in while living there. This page in no way represents the U.S. Army Corps of Engineers, Modern Continental, or the South Florida Water Management District.

Thanks to Paula Huckaby, Safety Officer for Modern Continental for the images of Everglades wildlife.

Postscript, 2014: This USACE document [PDF] gives a two page overview of how the pump station fits into the larger system. Page two of this glorious report has a lovely picture of the pump station in action. Gorgeous.