In the early 1990s, I associated the Adirondacks with freedom almost indiscriminately. Upstate New York was my stomping ground, and when I tired of the Fingerlakes, real wilderness awaited just a few hundred miles to the northeast. In the Adirondacks you could truly get away from the raging masses, classwork, and society. You could get yourself off the map. Hell, you could even get hurt.. That was its beauty, and I loved it. Amazing, then, that it took me another sixteen years to return. The lesson here is that there is absolutely no telling where life will take you.

I grew up on the beach and in small boats, and went to Cornell to prepare myself for a career in managing natural resources. My frustration with the "soft" side of that discipline led me to engineering, which led me to construction and planning. An affinity for languages led me to study nearly a dozen of them, which led me overseas, where my scientific skills were of use. And suddenly I find I've lived more time in West Africa than I did in upstate New York. If someone had taken me aside in 1989 when I left for school and told me where I was headed, I'd never have believed it. 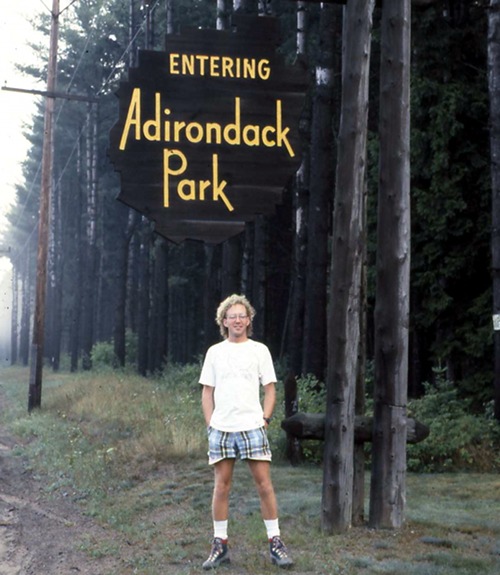 So this year I made an extra effort to return to someplace I loved dearly and have been thinking about intensely: the Adirondack Mountains. In 1991, as I entered the Adirondack Park for the first time, my buddy Dave stopped the car and insisted on taking a picture of me under the sign on Route 28. "This is a big moment," he said. "You're entering God's country now." I look at that picture and grin. Mop-head of hair? Check. No body fat? Check. No money, commitments, or responsibilities? Check. In fact, back in 1991 I was proud that everything I owned on earth fit into the back of a 1968 Jeep CJ5 (that's another story; I should tell it).

Flash forward to 2012, twenty-one years after that trip. I'm 41 now, happily married with two healthy, happy children. The hair is shorter now, and tinged with gray. The beard too. I'm in great shape physically, but gone are the days of zero body fat, and the skin is a bit wrinkled, particularly around the eyes where the past decades of tropical sun have worn in some grooves. But there I am, at the gateway to the 'Daks. God's country still.

We spent a week on the Fourth of Fulton's chain of links, and made sorties up to Raquette, Blue Mountain, and Long Lakes. Mornings we rowed a flat-bottomed skiff out around an island with no name where hardy spruce saplings had taken root in the thin soil covering an enormous rock sitting in 60 feet of water. Afternoons we fished from the dock; Diego (2 years old) preferred the method of trying to stab fish with the tip of his fishing pole, while Valentina (4 years old) trolled with a pine cone. No bites, but no hooks in my eye, either. 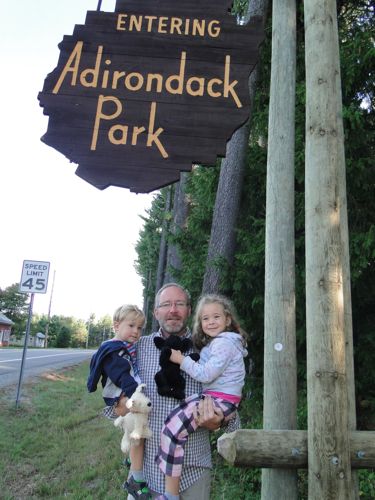 Evenings we built camp fires and toasted marshmallows, then retired to listen for deer and raccoon. This had been a summer of many bears, but we never crossed paths with one. The White Tails, on the other hand, had no fear of us. It was early fall, with morning temperatures around 37°F. The first reds and yellows flashed in the tree tops, and the afternoon winds brought down the first leaves of autumn. In the north country, winter wouldn't be too far off.

After over a decade overseas in Central America, Europe, and West Africa, the Adirondacks were more charming and welcoming than ever. I enjoyed the stars shining in an opaque sky over the lake, the call of the loon in early evening, and the rustle of the chipmunks in the underbrush. Best of all was the air: cool, clean, and silent. These things are at a premium elsewhere, and the value of what's rare increases with its scarcity.