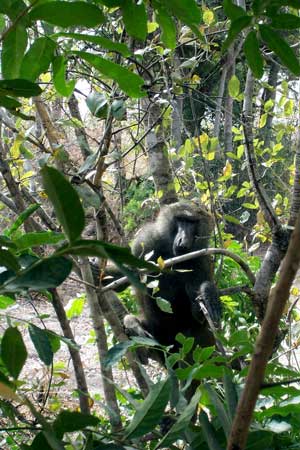 Crocodiles glide imperceptibly across the glassy surface, leaving no wake. Little popcorn birds in the hundreds gather in the tree branches with a whir, settle at the edges of elephant tracks now filled with muddy water, pivot deliberately to drink. A flash of red, blue, turqouise in the treetops. Deep elephant tracks in the mud, soft cat prints in the powdery sand, soft tracks that pad silently across the way. With a crack of falling wood that echoes like gunshot, a family of elephants approaches the muddy pond. The Beninese guide, scarred on both cheeks, nods knowingly. "They are coming to drink," he smiles.

Pendjari National Park drew us from Cotonou and convinced us to bump along ten hours of dusty highway and another 120 kilometers of corrugated dirt track for a bit of wonder. Benin’s most captivating wildlife reserve and most enticing tourist attraction lies along its northern border and isn’t easy to get to, but the trouble we took to get there more than rewarded us with a memorable trip. Writes Stuart Butler,

"With the possible exception of Cameroon the jewel in the crown of West African wildlife nations is Benin, whose two national parks, Pendjari and W, are without equal on this side of the continent. Pendjari was added to UNESCO’s World Biosphere Reserves list in 1986. It’s the better known, more commonly visited and therefore, better equipped of Benin’s two parks, and if you are in the country between December and June you should not miss this wilderness experience."

And after having already named one of our Basenji puppies after the place we went north to explore.

Pendjari National Park is 475,000 km2 of savannah tucked against the river by the same name, which flows from the feet of the Atakora mountains in a lazy counter-clockwise arch into Ghana’s Lake Volta. It’s home to over two thousand elephants, and hundreds of other exotic wildlife species, some of which – lions, leopards, gazelles, buffalo, warthogs, baboons, monkeys, crocodiles, and a rainbow of exotic birds – we were able to see while we explored the park’s dusty interior. 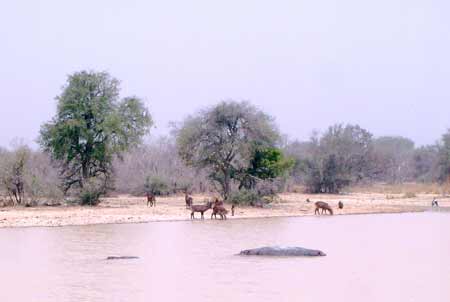 I was pleasantly surprised at how well the park was run. Well advertised in country, the park was clean and the dirt tracks that traverse it were in good shape. We were charged a nominal but reasonable fee to help offset maintenance expenses, and we learned a progressive management policy contributed to the development of the communities that surround the park, providing a strong incentive for the neighbors to take interest in the park and its wild inhabitants. A comfortable hotel lie at the park’s northern border not far from the Pendjari river itself; its restaurant served delicious meals in the hands of waiters more graceful than their colleagues back in the capital. We slept in a four poster bed draped in mosquito netting and listened to the footsteps of the gazelle in the grasses just outside the compound, while the equatorial constellations soared over our heads in an unfettered night sky.

We spent most of our time driving between the mare water holes where the animals congregate to drink. Hunkered down behind the straw thatch of the viewing stations or peering from the car windows en route to the mares, these are the images I will take with me from our safari adventure in Benin’s Sahel:

Dawn: Crocodiles glide imperceptibly across the glassy surface, leaving no wake. Little popcorn birds in the hundreds gather in the tree branches with a whir, settle at the edges of elephant tracks now filled with muddy water, pivot deliberately to drink. A flash of red, blue, turqouise in the treetops. Deep elephant tracks in the mud, soft cat prints in the powdery sand, soft tracks that pad silently across the way. With a crack of falling wood that echoes like gunshot, a family of elephants approaches the muddy pond. The Beninese guide, scarred on both cheeks, nods knowingly. "They are coming to drink," he smiles.

A dark lioness the color of wet sand prowls the grass edge in the dim early morning light bathed in the chirps of crickets and bird call that resonates across the mare, long tail hanging after the hunt. On the far side of the milky waters, a deep sandy beach rutted with streaks where crocodiles slid into the water. They watch us over their sharp teeth in the strengthening glare of the sunlight.

Noon: the light turns white and the glare off the ground burns like ashes. The air grows thick with haze. A heron skims the surface of the water, wing tips just missing its surface. A thick billed bird pecks at the water’s edge from bended legs, stepping nimbly around the crocs aligned along the shore. A sharp eyed baboon ambles over to drink, crouched over on all fours, body against the mud, ready to spring at a moment’s notice. His hands are frighteningly familiar and his eyes search us curiously.

Mid-afternoon: on all sides the light is too bright and our eyes hurt from squinting. Hippos drift gently in the soporific afternoon heat, pushing off the lake bottom with thick, heavy feet. Knuckles for eyes, a camel’s sweet face, and ears of mice that wiggle while the rest remains motionless. They drift quietly, ears, eyes, and nose aligned perfectly against the water’s edge, unperturbed by the birds that alight on their backs. One heron lands on a hippo’s snout only to have the hippo rise from the water in a toothy snarl, knobby spindles of teeth flashing; the heron flaps away, complaining loudly.

Evening and night: the sun drops like lead, throwing the river into shadows. The dust settles, the visitors are all aligned in the hotel restaurant waiting for grilled duck and couscous, comparing notes over tumblers of whiskey. Shadow ship elephants slip across the backdrop, dim as mystery and silent as the dusk. Above us, Orion flashes brightly in the moonless sky. By morning Scorpio has bounded up over the horizon and Orion is gone; Canopus winks knowingly while the cats prowl and the Savannah comes back to life.