These are images of Cotonou taken in the 1940s when Benin was still known as Dahomey, and Dahomey was still a French possession. It would remain so for another 20 years. It was still, by any stretch of the imagination, little more than a biggish village, with a sandy main street lined with small shops, a couple of well organized neighborhoods, and the outlet of the Nokoué river. Commerce centered around the wooden pier that jutted out beyond the breakers into the Atlantic, and hosted all manner of steam ships calling from Europe.

It's easy to be nostalgic about the past, overcome by a false affection for the simplicity and cleanliness, when in reality, "back in the day" you stood a very real chance of dying from any manner of tropical fevers, malaria, tuberculosis, and worse, travel took ages, and cultures were compartmentalized. The past is brutally prone to over-simplification. But the following is undeniable: a century ago, Cotonou was significantly better shaded. Look at the gorgeous tree-lined boulevard that follows the shoreline. Those trees are long gone of course, and the boulevard now hosts all sorts of businesses, a major port, and the nation's best hotels. Progress has replaced those trees with concrete and steel.

The fact that those trees are pines amazes me. Some of their kind still stand around Cotonou; a half dozen remain on my street corner, for example. But they won't be around much longer. Cotonou's residents don't seem to care much for trees, and as far as I can tell haven't made the connection between deforestation and heat. We've still got tropical species: coconut palms, mangos, some acacias, and almond trees. We've also still got some gorgeous compound-leaved deciduous trees that filter the afternoon light into a delightful shadow-veil, and some home owners have left their old ficus in place - what remains a potted houseplant back home is here a thick, somber cluster of roots and trunks that the birds adore. 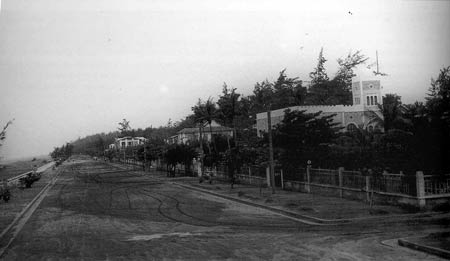 But I hadn't expected to find conifers on the shore of West Africa. It's a species not too different from the Caribbean pines of the Western Hemisphere, but I haven't got the resources in town to identify them with any more precision. I do know, however, that their tree tops remain the morning perches of all sorts of finches, bulbuls, weaver birds, and hoopoes. I've even spotted a couple of pairs of African Gray Parrots (possibly escapees from some cage: hooray for them!).

For the moment, progress has not quite done away with this habitat. But given West Africa's proclivity for sandy spaces and broad sky, I can't imagine Cotonou's remaining trees will be around for much longer. It's not just the trees in common spaces - home owners in my shady neighborhood are felling the trees in their own yards for a variety of reasons. But slowly and inexorably, the massacre makes the Cotonou of old look attractive in a way even the over-simplification of memory can't obscure.