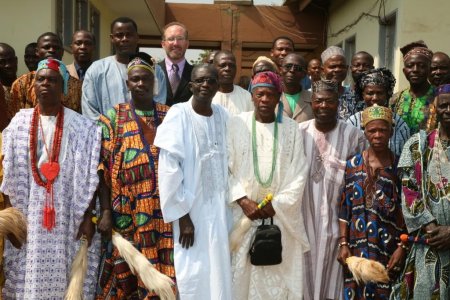 It's hard not to evoke Cotonou's name in the local language, Fon, because the expression "River of Death" turns heads. But in Benin, West Africa, the past and the present are the same, and the future and the present are indistinguishable. So it is that, irregardless of what Cotonou is today, it will forever retain the soul of an African slaving hub at the mouth of a river that carried an unfortunate cargo down to the waiting slave ships. And for the moment, Cotonou is my home, and this message is coming to you live from the River.

"I've been in Benin," says the T-shirt; "Right there next to Nigeria," says another. Don't worry if you're not familiar with the West African nation formerly known as Dahomey: it is infrequently mentioned by the international press in a continent where no news is good news. A French colony until the 1960s, Benin is a tiny nation tucked under the Elephant Ear of West Africa, and is best known for being one of the continent's stronger democracies. It's also a land of contradiction and frustration, of hope and of desperation, of pride and pretension. In the three years I've lived here I've drunk whiskey with kings, been the victim of a mob throwing coconuts, surfed a couple of decent waves, and rubbed elbows with a culture that three years later, I still barely know and perhaps never will. This is, of course, the thrill of travel and of living in a foreign country.

The expat life in Cotonou isn't bad. Benin is essentially a safe country, especially compared to Nigeria, our neighbor to the east. Here, you are at constant risk of annoyance, hassle, and occasional petty theft, but physical aggression is rare, very rare and frankly, I'm safer here than I would be in any large American city(1). Cotonou is less a city than a large village; large parts of the streets off the principal arteries are sandy and potholed. "Downtown" is little more than a few dozen shops and a traffic jam, and most Africans do their shopping in the sprawling, chaotic Dantokpa Market, at whose heart lies a vibrant Voodoo fetish market. We can get better tasting croissants and pastries here than in Washington DC, but we'll wait for weeks before one of the local supermarkets has cream cheese. We've got talented leather workers, tailors, and artists, but can't get the parts to fix the air conditioner. And though we successfully dodge the bullet of the European winter, it's frequently so hot outside that we sweat while toweling off from the shower.

Furthermore, it's expensive. Benin produces little in the way of agricultural products, and as a result, most of what we consume has been imported at great expense. I'm speaking about expat staples like milk, wheat flour, jam, butter, breakfast cereal, cookies, and such: they're not cheap. By contrast, we have the option of the local food. The Beninese diet is similar to the cuisine across much of the continent: starchy p&acircumflexte, a sticky, doughy blob usually made of pounded yam, corn, or manioc, over which a spicy vegetable or meat sauce is poured. It's spicy, and too heavy for every day, but not bad when I do eat it. The dependence on imports however makes just about everything expensive, from gasoline to bread to shoelaces to butter: it's all come in on ships.

Cotonou's two biggest defects are that (a) everything is harder to accomplish than it should be, and (b) there's not a whole lot to do. We don't even have a movie theater (and never will, given the thriving market for pirated DVDs). As a result, the expat community takes care of itself in the old way: endless dinner parties, cocktail hours, and invitations. I'm not complaining, and it's a healthy reminder of how communities behaved in the days before everyone sequestered themselves in their personal pleasure palaces with their video game consoles, broadband Internet, and other toys. It's a rotating community as the expats rotate through, but participating in such a diverse and friendly community is pleasant.

Weekends I'm at the beach surfing (there's a halfway decent bar break along the coast), or relaxing on the orange sand beach. Evenings I walk the dogs around the neighborhood's sandy streets, read and write. It's a simpler lifestyle than the one I lived back in the States, but it has its advantages, and I personally find elegance in simplicity. I also experienced the Harmattan for the first time here, an awe-inspiring meteorological phenomenon born in the Sahara desert: the wind turns 180 degrees during two months and comes from the Sahara, bearing a fine sand that settles everywhere and darkens the afternoon skies. I sometimes think that experiencing things like this are why I travel, although putting down a shot of whiskey with a king is a pretty cool reason too.

The fact that everything is harder than it should be, though, is the one that slowly eats at your soul: parking, driving through chaotic traffic, arguing with the same people over the same prices every single time, dealing with lousy service, bureaucratic processes that seem both pointless and endless, and the infinite minor hassles that accompany every single transaction is tiring. Tiring, too, are the repeated power outages, water outages, cell phone outages, the system resets at the Internet provider, the fast broadband that's actually slow, the saturated cell phone networks, and the phone lines that don't permit easy calls. I think back to the days before these services and remember I should be grateful. But the constant outages are wearing, and in sum lead to the only remedy possible: travel to someplace else once every 4 months.

I mentioned Voodoo. It's Vaudoun, actually, but yes, Benin is the birthplace of the world's most misunderstood religion. Haitians are the second most populous followers of Vaudoun, but it's because the slave trade carried Beninese to the Caribbean island that Haiti gained the religion. If you're thinking "Serpent and the Rainbow," you are way off; Vaudoun at its roots is an animist religion with strong ties to the natural earth, and a belief in good and bad forces that would be recognizable by anyone who ever watched a Star Wars movie. Large parts of Benin believe in Vaudoun, but there are lots of Christians and Muslims as well, and everyone seems to live together in a peace much of Africa (not to mention the Balkans!) should envy.

But there's no escaping the effect of slavery on generations past. You see it in the disorganization, the mistrust, the difficulty with which the Beninese work together toward common goals. As a white American who experienced the story of the slave trade in middle school textbooks and who thought of the whole story as ancient history, it is eye-opening to see the impacts of slavery in the 21st century, and to learn that slavery is in no way ancient history in one of the countries that experienced it first hand(2). But let's go back to the fact that three religions and a half dozen ethnic groups have been able to live in relative harmony in one of Africa's stronger democracies. Benin: quiet, mostly unnoticed, little understood. It has suffered mightily, and never makes the headlines. Life as an expat here can be frustrating, but not necessarily dangerous. It's expensive and somewhat boring, but in its simplicity and sparseness it brings elegance to austerity. And from the point of view of a foreigner trying to get a job done, I'd say that being at the center of such a whirling, swirling mass of humanity trying to better its situation is amazing. Life at the mouth of the River of Death is actually pretty peaceful. Next vacation home for swarms of winter-evading European retirees? Not likely. It's rather the kind of place that sends you eventually on your way with more questions than answers, and the conviction you understand less of the world than you did when you arrived. In short, Benin will change you, as it has changed me.

(1) There's one notable, horrible exception. Peace Corps Volunteer Katie Puzey was assassinated in her sleep in March, 2009. A stellar volunteer, well-loved by her community and extremely well integrated into the village where she lived, the motives for this atrocious murder are not yet known, and to date, justice has not been rendered. We will not forget!

(2) Slavery continues to this day, and not just in Benin. Throughout Africa, families "lend" their children - sometimes permanently - to construction projects in the city. These children are poorly paid, sleep on the ground, and remain uneducated for their entire lives. Call it what you like, but slavery in some form remains a real part of life here.