We started with Morocco's newest but most starkly dramatic minaret, the Mosque Hassan II, at 200 meters, the tallest minaret in the world. After visiting so many gorgeous cathedrals and monuments throughout Europe, all of which date from another era, it was amazing to tour a structure that was built during my lifetime (in fact, since I graduated from university) and will some day, centuries from now, be an "old" monument for tourists of another generation to gape at. 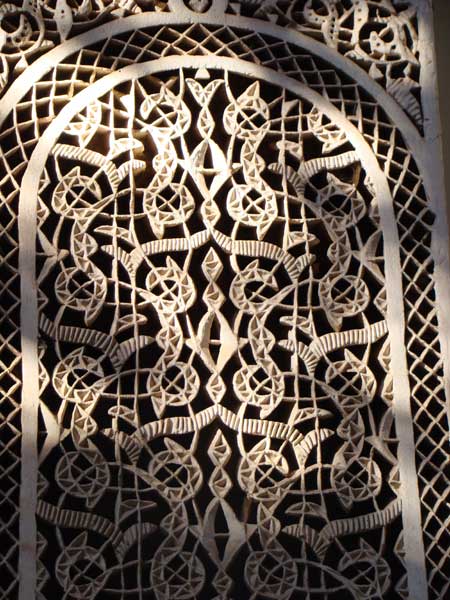 The Koutoubia mosque in Marrakesh was stunning because of its architectural simplicity but its stark elegance, particularly against the backdrop of a deep blue, winter sky. Dating back to the Almohid period of the 12th century, it was pleasing to think the grace and elegance of that minaret has remained unchanged through the centuries, and it was easy to imagine what it must have looked like centuries ago, as one approached the walled city on horseback.

In Fes, it was nearly impossible to get a clear glimpse of either the minaret of the Kairaouine Mosque or the Medersa Bou Inania, given the narrow, winding streets and the short vantage points. But it was exciting to see them above us over the tiled roof line. But we did find, buried deep in the Medina of Fes el Bali, a school of architecture, where modern Moroccan students studied the dramatic Islamic architecture of centuries past and developed their own creations, building on the past. Their models and projects were on display throughout the old building, and encompassed architecture, wood carving, stucco, and tilework. The building itself was a marvel of Zellij tile and Kufic Arabic script.

The school of architecture reminded me of something that has quietly irked me. While visiting the grandiose cathedrals and elegant medieval buildings of modern Europe, I wonder if we are capable of still producing that kind of architectural splendor. Do the masons, stone carvers, and carpenters even exist today who can design and build with that sort of elegance? Modern buildings are designed with much different goals (like plumbing and central heating, both of which I encourage). In Fes, we met some of the designers who would be responsible for ensuring the buildings of Morocco's future respect the elegance and charm of Morocco's past.

Also appreciative of the high vantage points were the White Storks, which didn't take advantage of the highest minarets, but which seemed to enjoy setting up shop on a lot of the nation's other rooflines and peaks, including a newish-looking condo facility we passed in the Atlas Mountain village of Azrou. "Nice view ya got up here, don't mind if we stay!" The Stork doesn't represent fertility to Muslims the way it does in Western culture, but as we are expecting a child, seeing a stork around every corner was a whimsical reminder that we will soon be traveling as three.