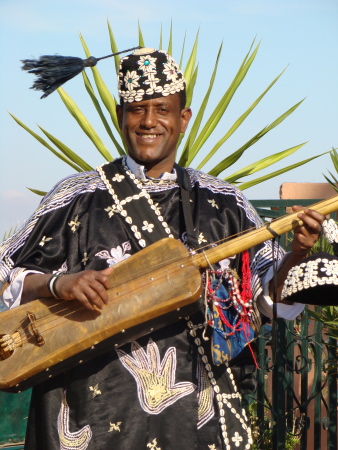 That's when the troubadour appeared.

There were few other occupied tables so he gravitated naturally to us and uniquely, his smile and quiet demeanor overcame my natural reaction to shoo him off. So he played for us. He started with the stringed instrument, a traditional Moroccan guembri, whose strings he plucked and strummed with practiced fingers. The rhythm section entered: castanets and noise makers he worked by shaking his legs. That was already a feat in agility, but once his song took flight he added the final touch I captured in this photo: nodding his head, he coaxed the tassle on his traditional hat into the air, and kept it spinning there in time with his song.