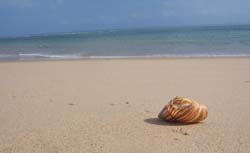 Cruising eastward across Maputo Bay its hard to believe it's a bay at all. Once you leave the confines of the harbor and set the compass on an eastward course, the Maputo skyline falls away and the waves crest higher and higher until the tranquil ripples of the bay build into a legitimate Indian Ocean swell. Soon there's only the compass to guide you as the coastline fades into the harbor mist. But it is a bay indeed, as any ship captain can attest to, and we passed a bevy of merchant marine freighters queing up to enter the harbor and discharge their cargo. Then, ghostlike, an island rises out of the sunrise before you, and you have reached the barrier.

Ilha da Inhaca is a lump on the horizon, a sandy knob that would be just the continuation of Cabo de Santa Maria and its game reserve were it not for the deep channel that separates it. The north side of the island bears a lonely lighthouse that guides ship traffic into the harbor and keeps the tankers off Inhaca's low sandy companion, Ilha Portuguesa. 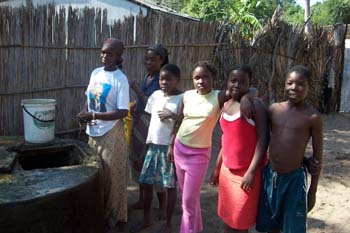 Our chartered boat took us first to Ilha Portuguesa, named for Mozambique's colonizers. The (probably apocryphal) story goes that ships would stop to take on water and wood from this island before heading towards the open sea. It's hard to believe because the island is too small to be able to provide either item in great quantity. More likely is the other story, that in Portuguese times they used it as a leper colony. It can not have been much of a home for those poor lepers, but for a curious traveler-explorer it was top notch. Setting off clockwise around the island the sands changed according to the cardinal direction relative to the Indian Ocean. On the westward (bay) side, the sand was white and crystalline, swept into powdery drifts and rife with fingernail-sized shells and the bones of fish. The sand jumbled upward into dunes that drifted inward to a woody hillside covered with scrub brush and low hanging trees gnarled by the salty sea breeze. Farther along the island's diminuitive coastline folded inwards to cradle a tidal estuary watered twice a month when the moon was full and noisy on all sides with the calls of shore birds. We spent only a few hours on the island - enough to appreciate the strength with which the Indian Ocean threw itself at the shore, creeping inexorably upwards along the wet sand. From there we rounded the lee of the island in our charter boat and crossed the narrow strait to Ihhaca.

Relative to its tiny cousin, Inhaca is huge, but even then, it's just a couple of kilometers across. Large enough to host a handful of communities and to boast both a resort hotel and a small school, Inhaca is home to large fishing communities that depend on the sea and the bay for their livelihood. The same full moon that captivated me from my hotel room in Maputo was the cause of a neap tide that left our chartered boat several hundred yards from the shore. We waded in with our packs on our heads across a broad tidal flat of mollusks and muck, and while my companions headed to the deck chairs at the hotel, I set off to explore the village and the fishing boats beached on the tidal flat, waiting for the water to rise.

Memories of my Peace Corps days came flooding back to me as I found a friendly child to guide me through the village in Portuguese. Kids everywhere are friendly and ask for nothing in return. I was shown the little school and the water connections from which no water poured, the community well into which the women dipped dirty buckets several times a day to provide for their small homes. I saw the small, neat homes, set off one from the other by thin fences of tightly woven fiber, and the small farms of roots and vegetables. I paid with a couple of coins I had in my pocket and returned to the coastline, where the tide had begun to fill the harbor. The water crept in like locusts, the wind pushing a thin sheet of ocean over the tidal flat until the boats began to lift and rattle at their anchors. The men began pooling around the water's edge, riding out to their small craft in rafts and small boats and inspecting their nets and lines for another evening of fishing. 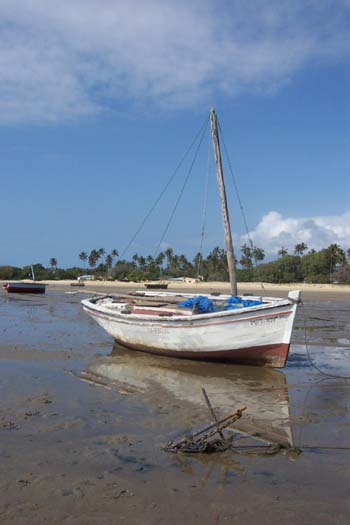 I wandered around at the water's edge, chatting up the fishermen about -- what else -- fish, and found them just like the fishermen I met on the coast of Sumbawa, Indonesia and El Transito (Nicaragua): hard working, fun loving, and intimately in touch with the sea. "You should try some of our Mozambican fish," they called out at me from the deck of their little wooden craft, "it's the best." Standing on the soft sand of Inhaca's shore, it was hard to argue otherwise. As the water's advance brought it under the municipal pier and my own craft floated up alongside for the passage back home, it was more clear than ever just how little the waters separate us one from another. Your own fish always tastes the best. That voice followed me all the way back across the bay as the sound of the broad Indian Ocean faded behind me and night rose over the African coast.