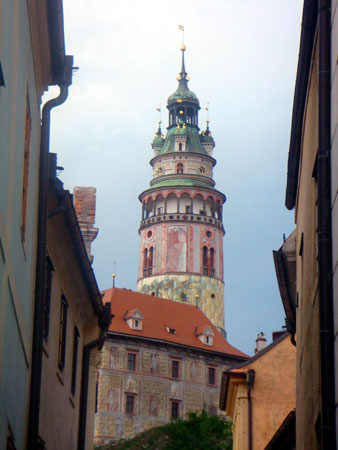 But the tower's prominence receded immediately as we approached the village and the river drew into view. A dramatic oxbow bend made permanent by the human settlement that fortified its banks, the river (headwaters of the Vltava/Moldau) poured forth from the wooded foothills of the Šumava mountains, nearly touching its own shoulder blades here before hustling north to the plains and eventually through Prague. Within the confines of the switchback lay a cobbled village of whitewashed buildings, tiled roofs, and arched, timber bridges.

Like most towns from the medieval period, Český Krumlov had a castle; this one - the Krumlovský Zámek - leered over the granite rock-face at the northern shoulder of the river bend. We ascended through the bold, wrought iron gates and traversed the length of courtyards and antechambers to a bridge of sorts leading to the western wing of the castle.

I'll remember little of the castle, frankly; rather what will remain among the visceral memories of this noble little village is the hail storm that slipped over the hillsides from the west as we looked down at the village from that crenelated perch. The late spring sky darkened with the first heavy, frigid water drops, and then suddenly the ice fell: opaque pellets the size of green peas, ricocheting off the castle walls and plunging into the roaring river below. Up in the eaves of the castle, we remained safe and dry until the storm passed and the late afternoon sun bathed the now shiny town in orange.

That night, we warmed ourselves with chicken stew, stuffed pork, and dark beer, a meal probably unchanged since medieval times, with a new appreciation for the ardor of medieval winters past. But it being late May, we slept with the window open to the river, and let the cool spring air carry in the rustle and chatter of the waters, in a village in the bend of the river.