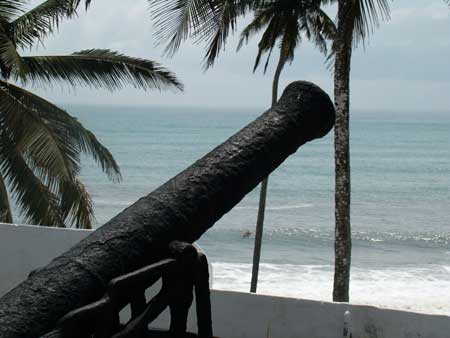 There is no escaping the legacy of slavery in Africa. This was one of the first things that surprised me when we first moved to Benin. It shouldn't have been surprising, but back home slavery was always presented as an important element of history. In Africa, slavery and its effects are very much a part of the present. In Benin this is dramatically evident in the Route of Slaves in Ouidah culminating in the Gate of No Return and the Monument of Reconciliation in Cotonou. In Ghana, where from 1600-1700 between 10,000 and 15,000 slaves were exported , the ghastly slave castles remain horrific monuments that bear silent tribute to a horrific practice. 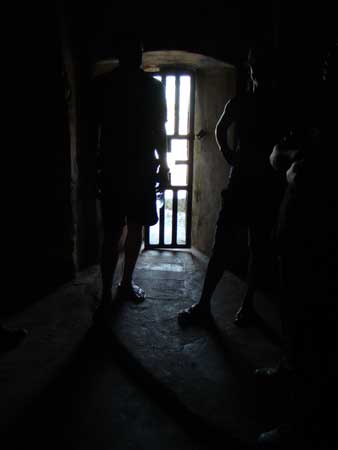 We visited the Elmina slave castle at Ghana's western edge and the shore of the narrow Benya river. It was built in 1482 by the Portuguese, but was inhabited by the Dutch by 1637 and Britain by 1872. A stronghold of the Gold Coast, it served, as did all the European castles of that era, as a combination of trade center, point of military presence, and slave holding-tank. It's an inspiring tourist destination these days, offering guided tours with talented, trained guides that help interpret the place for you.

The tour's poignancy comes from the contrasts: the dark, lightless slave chambers with the narrow stone walkways that led out through gateways to the awaiting slave ships one floor under the little stone chapel in which the castle's European residents worshiped God, the upper chamber of the castle's Governor with a back passageway for select female slaves to take a trip "upstairs" to the death chamber in which groups of unruly slaves were imprisoned until they perished from starvation and dehydration, the door remaining barred closed until the last of the unfortunate captives expired (Our guide ushered us all inside and then shut the door behind us, delivering his explanation through the air holes punched in the heavy door).

Elegant evidence of Africa's resiliency is the modern town of Elmina, which flanks both sides of the castle and extends upriver about a kilometer. The old slave castle remains right where the Portuguese built it, but life continues on both sides in much the way it always has: fishing families mending their nets, merchants hawking hardware, fresh fish, and vegetables from inland. It's somehow unnerving to peer out the windows from the upper stories of a 15th century slave castle and see life continuing unabated. But perhaps that is the point Africa and its slave castles make so elegantly. 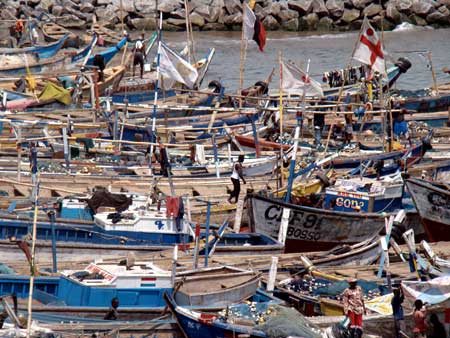