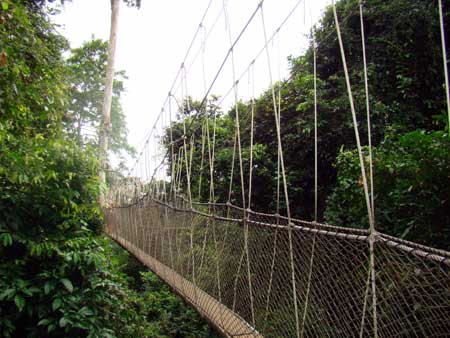 Perhaps one of Ghana's most famous tourist attractions is the relatively new Kakum National Forest canopy tour, constructed in 1995 with lots of donor inspiration (and money), so we went to give it a look one early morning before the sun was too high overhead. We shouldn't have worried -- it was hot and humid anyway; I was surprised how hot Ghana's tropical forest could really be, but the still air felt like liquid and the sweat ran down my face as we hiked up to where the canopy tour began. Our guidebook says:

We saw none of these.

In fact, the idea of the canopy walk is silly, when you look at how they are implemented. In Nicaragua, canopy tours are really no more than zip lines that attract the thrill seeking crowd for whom the canopy is just a convenient place to string some heavy cable and go for a swing. Same goes for the canopy tour in Costa Rica's MonteVerde, which I found a lot of fun but not that educational. The Kakum National Forest canopy tour is a series of rope catwalks strung about a hundred feet up in the tree tops. That would make for slower traveling and more time to look down into the canopy if there weren't other travelers waiting in line behind you. As such, the experience is a bit of a fast walk along the high wire.

That said, the number of travelers that joined us for the canopy tour was impressive, even early in the morning before the crowds really got heavy. But I left with the distinct impression the canopy tour would have been more enlightening on a rainy day with no other travelers on the tour. That way you could simply sit down on the canopy walkway and wait for Ghana's elusive wildlife to emerge from the trees. Nonetheless, I had a fun time, and the interpretive center was exceedingly well done and very visually stimulating.

There's another reason the Kakum National Forest is important and an interesting destination for tourists: by providing an alternative source of income from forests, the Kakum local residents have found a way to live with the forest instead of living from it. Tourism is what keeps Kakum from falling under the axe, and as such serves as a model for similar development projects in areas where tourism can provide a source of revenue other than selling timber. So perhaps while Kakum's canopy tour didn't provide us much insight into the species living below the canopy, it provided us a lot of insight into the species walking along its catwalks.