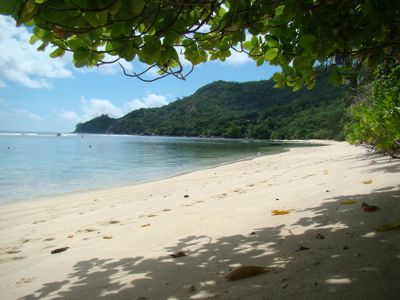 We arrived in the Seychelles on a late morning flight via Nairobi, pulling into a landing pattern just as a rain shower passed over the mountainous slopes of Mahe like a primordial ghost. Beneath our wings was a smallish island standing resolute in a turquoise sea, 900 meters high at its center and surrounded by coamers spilling over the reef on all sides. But after landing and emerging through a stunningly organized airport onto the streetside, Mahe was no less extraordinary from ground level.

It's nigh impossible to describe the Seychelles Islands without resorting to either hyperbole or the P word1, and the travel literature we came across all succumbed without a fight to the temptation. The worst offender was surely the Lonely Planet guide to the region, which was written by someone so overwhelmed by the archipelago her vocabulary vanished. There are surely many more who will follow.

But the islands really are a treasure. We arrived in the Seychelles on a late morning flight via Nairobi, pulling into a landing pattern just as a rain shower passed over the mountainous slopes of Mahe like a primordial ghost. Beneath our wings was a smallish island standing resolute in a turquoise sea, 900 meters high at its center and surrounded by coamers spilling over the reef on all sides. But after landing and emerging through a stunningly organized airport onto the streetside, Mahe was no less extraordinary from ground level.

December happens to be the apex of the Seychelles' rainy season and that first rain shower we experienced would be just one of many to follow. The green slopes before us disappeared into the mist of clouds too wispy to make it over the top. A narrow road twisted its way along the coastline at the foot of those mountains, the granitic heart of the geologically oldest islands on earth. At every bend in the road we came across a panorama that begged for photographing, but the narrow, shoulderless road - mountain face on one side, precipitous drop on the other - prevented any such thing. Rather, we spent three nights comfortably settled in at Anse Forbans in a little beach front cottage that lay still in the shadow of those granitic summits on a long, arching ribbon of sand lined with coconut palms and takamaka trees. 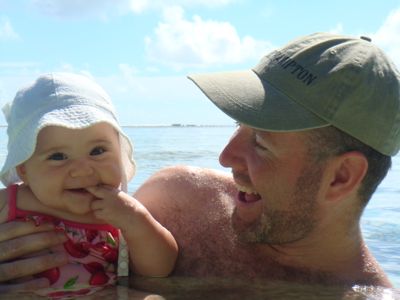 The islands have existed as such since the break up of Gondwanaland in the Early Cretaceous geological era, when India was still an island and South America and Africa were still joined at the hip. That the Seychelles have survived so gracefully is astonishing. Never before have I seen an island so verdant, including anything I ever came across in Indonesia and certainly elsewhere. But it was clear that a single year of failing to maintain the roads would lead to the forest canopy closing over the top, and flowers, undergrowth, and myriad varieties of hardwoods bulged from every square inch of the fertile hillsides. Only the enormous granite boulders, rounded and grooved over millenia of weathering, remained in testament to the islands' origin in prehistory. Larger still, the fantastic granite rock slopes the locals call glacis peered from amid the tropical foliage on the hillsides above us.

Beneath the waves Mahe was no less spectacular. Though I looked longingly at the waves breaking over the reef with an eye to surfing them, I realized Anse Forbans was better suited to snorkling the inside of a reef that was far too shallow to safely maneuver a surfboard over. Snorkling exposed a new set of wonders: coral formations of all sorts, and dozens and dozens of species of tropical fish. Had I been better studied in the differentiation of marine life, I suspect I would have been more impressed still.

Our first morning on Mahe the sky burst just before dawn, but the rains lifted a cool breeze through the windows of our chalets. The following day dawned bright and cloudless (I sunburned, naturally: isn't that the way it always goes?) and that evening, the inky sky was punctuated by the winking of thousands of stars. They are more clearly visible in the Seychelles than in Benin, where I've been doing most of my stargazing recently, and at 6 degrees south latitude I was pleased to follow the constellations I knew all the way beyond Lepus to the exotic, difficult to discern constellations around the south pole like Carina, Volans, and Dorado. Bright Canopus and Archernar flickered in the sky over the south end of the bay.

Such satisfying star gazing simply reminded me of yet another way the Seychelles are enchanting: they are rich and vibrant no matter where you look, from the rich colors on all sides, the call of the birds from tree top, the trickle of running water on the glacis, the flash of color underwater along the reef, or the simplicity of a starry night. Mahe bid us a lovely welcome to an archipelago that was fantastic at every turn. Deserving of the P word? No doubt, but surely all those authors can exhibit a little creativity!