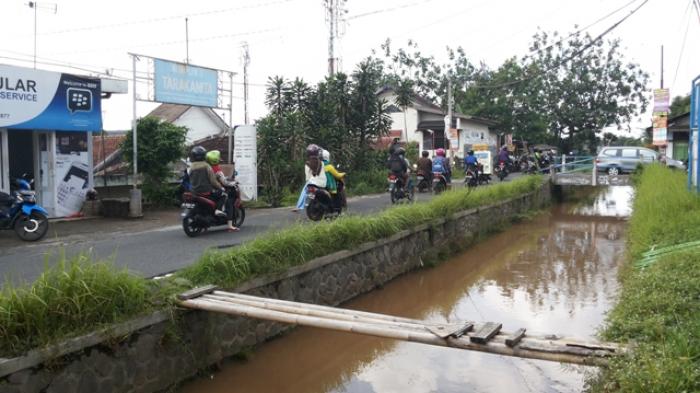 Our daily routine was lovely, and changed little over the year: the classes we taught started in mid- and late-afternoon, and therefore sometime after a casual morning of reading, preparing lessons, or running errands and exploring, it was time to make the commute to school.

That meant saddling up our bikes and riding the sandy, back roads from Pogung Baru on the outer limits of "urban" Yogyakarta down through the villages and rice paddies of Central Java to school. It was one hell of a ride, and before long we knew the longest route possible that permitted us to avoid the hectic and slightly dangerous traffic of Jalan Kaliurang. When we rejoined the highway and turned our bikes eastward towards central Yoyyakarta, it was when we'd reached the Selokang.

No other feature on our route was as much a topic of conversation.

The Selokang was a wide, trapezoidal canal of reinforced concrete, flanked on both sides by narrow, paved streets. The canal was never dry, even in the dry season, when its horrid trove of jetsam was revealed: a horrid gunk of urban debris: old tires, paint cans, bits of old steel, and worse. More often, it teemed with rusty-colored water. After monsoon rains, it was an absolute torrent of angry, rushing water (frequently bank-full). The selokang was one hell of a water conveyance system, but it was filthy, and like urban centers in most of the developing world it was used casually for dumping trash. That made bicycling alongside it somewhat scary. Given the aggressive and unpredictable driving, you ran a better-than-average chance of getting pressed to the edge by a speeding sedan. We made a pact among ourselves:

If you and a friend are bicycling along the Selokang and your friend is pushed into the water, you are under absolutely no obligation to rescue him/her. Fact is: even if you extract your friend from the water, disease and filth will lead to his death anyway.

Alhamdullilah, we never needed to find out.

One Saturday, Jamie and I decided to saddle up extra water bottles and a bag lunch and ride westward (upstream) to trace the canal to its origin. Hours later, defeated, we turned around, as the Selokang carried on unabated. That thing is huge. Reading about it on the Internet years later (there was no Internet when I was living in Java) I learned the Selokang was a bit of history and a marvel of modern, hydraulic engineering. We just knew we didn't want to fall into it.

Yogya had a surprise for us yet: towards the end of the school year, after a particularly heavy rain, we were surprised on our way to work by some shouting and laughing. To our astonishment and horror, groups of rowdy university students came pouring around the corner captaining rubber inner tubes and rafts, splashing and dunking each other in the filthy water. White water rafting expedition ... more like a brown water rafting expedition. We hoped they were medical students with a suitable supply of and access to penicillin.

Back in the days of print film and recent graduation, I took too few photos. Borrowed this one from Tribun Jogja. Terima kasih.