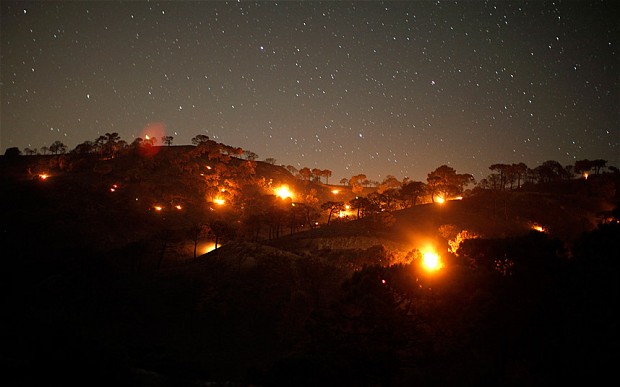 It made perfect sense on paper, when you looked at a map: why return to Condega from Rodeo Grande through Somotillo, Chinandega, Leon, San Isidro, and Esteli, when there was so clearly a road that led from just north of Rodeo Grande to San Juan de Limay and then to Esteli? Another option, a road to Somoto (also close by) remained still unrealized. "We'll decide later," we thought, about what we'd do. The long way back home is certainly better known, more secure, perhaps easier. But to complete the circle?

The bus passes at 5:10 AM, we were told, and the point where I'd catch it lie a decent two hours' walk north of here, or perhaps more. M had walked it once before, or rather, had traversed it on horseback when it was nothing more than a trocha (footpath). Just a few weeks ago however they'd formed it into a real road with bulldozers and heavy equipment. Should be easy to follow, perhaps even an adventure. A slow tranquil day passed as we made our decision. M cut up pineapple and mangoes and I made pancakes we ate with syrup and strawberry jam. Green tea with sugar sip by sip. Lounging in the hammock in the doorway chatting about Life, the Universe, and Everything. Lounging in the tijera in her bedroom looking at pictures. The heat, the darkness of that back room, children's voices everywhere, her hound dog Maggie reclined at my feet. 'I can't believe how much she loves you,' says M.

Mid afternoon, and putting the pictures away, nap for a half hour or so. Then, waking up, the decision must be made: Do we leave then, spend the night in San Francisco del Norte (San Pancho) and catch the bus directly? Or, do we putz around the house all evening, then leave at 3AM to catch the bus, walking all night and hopefully under moonlight? Well, it was obvious: we leave tonight.

The recently made road, broad and flat, scraped through the dust and the parched earth. With every footfall, a puff of dust rises and fills my toes and my birkenstocks. Soft like talc, I think of Jesus' disciples in sandals, having their feet washed. How pure, how sincere. I'm dirty before we pass the last house of Rodeo Grande. We leave in good moods, recently awakened from our naps, M in fresh khakis and a red tank top and perfume, me in shorts and birkenstocks and my Peace Corps t-shirt. Maggie accompanies us hopefully for part of the way, then gets shooed off.

We walk through a ruined wasteland of Chinandega, trees felled, land scorched and burnt. Rocks, red soil poor and unnourished. Gasping from the heat is the land. Black, ashes, smoke, the orange flow of the flames advancing up the hillsides, the black smoke. Death. Loss of habitat, of everything the land has ever been able to provide us. Awful to see the earth lying bleeding, battered, on its knees. Ravaged. I think of refugees, of Kosovars fleeing Serbia under Milosevic's relentless assault. Mist and I are a refugee couple with everything we own on our backs. Dusty. In the bags: toothbrush, water bottle, bag-o-salad, three mandarins, my crapola. "It's two hours away," we're told as we leave Rodeo Grande. But we've departed at 5, and at 6 when the sun sets, "the night has grabbed us" as they say in Nicaragua.

Still, the road winds up and over the mountain ridges. We stop at occasional houses, the homesteads and folks on both the brink of civilization and the brink of Nicaragua. Always, always we are told: two hours. Dusk, then darkness. Now we are truly alone. But no! We are passed by a group of four men headed (thank God) in the opposite direction. Nervously and defensively I move between M and them as we walk, feeling an unspoken urge to block, or at least be the first victim. Endlessly we are walking, trying to make conversation, trying to quell our fears, trying to appear brave to the other.

Surreally, a woman passes on the road, asks us if we want to catch the bus. Here? Clouds, wind, the moon is in its third quarter and won't rise until after midnight. Little, little light, and still the fires. An intersection emerges from the darkness, a bus rumbles past, and twenty minutes later we are in San Pancho: relieved, weary. Civilization, salvation.

San Pancho: paved adoquine streets, small houses at curbside. It's late and we're exhausted and relieved. Parched, dusty, dirty. Refugees fleeing Kosovo. There's a concrete pila (well), and I gratefully wash my tired feet with its water. A small, simple guesthouse, cots with sheets, two old women in charge. We're the only guests. They cook us fried beans and rice and cheese and a fried egg, and bring us two sodas each, which we accept and drink down gratefully. The liquid is precious after so much dust and so much heat. That burnt corner of Nicaragua continues to burn through the night: we know it will continue to burn for weeks longer. We brush our teeth and rub each other's feet, and go to sleep in separate beds. I wake three times in the night, thinking I've been bitten by scorpions, or that one is walking along my bed beside my pillow.

Early morning, pre-dawn, the town lit by streetlights and a few stars I don't recognize. I bathe at 4AM, listen to the first chickens calling, warm water of early morning running off my body onto the concrete floor of the bath. Looking up through the gap between wall and ceiling I spot Scorpio among the palm leaves, red Arcturus beating at its center.

M sits up in bed to give me a big, sleepy hug, and I feel the warmth of her body against me. We've enjoyed each other's company and the short night and the previous evening's adventure quite a bit, I think, but ultimately nothing will come of it. But I'm sorry to leave, and think back at the long, dusty road that led us here, through the night, through fear, illuminated on all sides by the fires that speak of death but presage the rain.

There are no pictures from this walk, of course. Thanks to The Telegraph (newspaper) for the loan of this one. It's a picture of hillsides outside of wealthy Denver, actually, but at night all fires carry an equal weight of fear and danger. This picture looks almost exactly like what I remember from the march.