The weather was cooling already in early fall, though it was hard to tell by glancing up at the omnipresent conifers. The water had turned a deeper shade of blue with the arrival of September's chill, and I didn't relish jumping in it. The road was long and life was good. 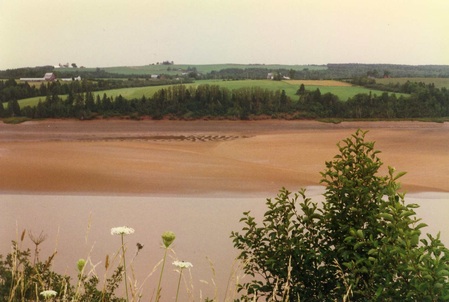 I'd been tempted to drive late into the night to pass through New Brunswick but wound up sleeping there, happily to say. Having no set itinerary, it was impossible to be late for anything, after all. There I saw the Bay of Fundy for the first time. Camping in Fundy National Park among a scattering of late-season Quebecois, I entered a world of frogs and loons and rabbits. A heron soared over damp mud flats in a river valley bursting with conifers. There was space here - plenty of it - and fresh air and sky. I gazed out over the red mud flats of Fundy, eager to see the waters rise and subsume the red clay.

As the sun lowered and then slipped behind the treeline, I camped in a grassy field ringed with pines, not far from Lake Wolf. Over the coals of my wood fire I made tea with cream from Nova Scotia and sugar from Toronto, thinking back on the day's drive through roadsigns in French and petrol sold in liters. Campers not far down the lakeside invited me to join them, and around the fire I heard casual stories about temperatures thirty degrees below zero and snow drifts fourteen feet high. Even Boston looked tepid in comparison.

Via Kejuimkujik National Park (called "Kedji" affectionately by the locals), I made my way to Shubenacadie, just dodging the rains of nearby Hurricane Edouard, where, at the terminus of a long, bumpy, gravel road I found a simple wooden building and two signs pointing down to the riverside. There I boarded a rubber zodiac with a group headed out to ride the Bay of Fundy's famous tidal bore. 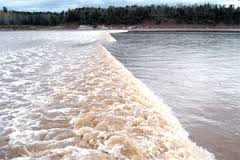 The waters were the color of cinnamon-chocolate, brown with silt and red with clay, and the passing storm hadn't helped. And then the bore was upon us. What fun! Fundy's Tidal Bore is barely a surfing wave, though I'm told on a spring tide it can sometimes reach ten feet. The bore changed character with the shape of the river, cresting or even curling in narrow or shallow areas and disappearing in areas where the river held more volume. We rode it for a few moments before turning our attention to the myriad rapids and whirlpools that follow the advancing tide.

Water bouncing off a beautiful gypsum wall swirled across the river's breadth, causing a whirlpool we immediately threw ourselves into. Jules Verne, eat your heart out! It was a quick ride down the six feet to the pool's bottom, but I assure you it's a strange feeling to see the river's surface roiling at eye level. And naturally, we got soaked in the rapids.

I watched the sky a long time, concluding that such beauty was reserved for distant, dangerous places, and that nature has good reason for exacting her own special sacrifices from those determined to witness them. — Adm. Richard E. Byrd, "Alone" (1938)

In my case, the sky was filled with the spirals of the many eagles that soared over our heads. Their nests were at the river's edge, and I'm told they can weigh up to 800 pounds in some cases: the eagles return to the same nests every year there in Shubenacadie, which was prime wintering ground for them.

I'm half tempted to return with the family to visit again. The tidal bore will be there, I'm sure. I hope the eagles are, too. As for me, when we disembarked from the zodiac I'd made a couple of Nova Scotian friends who thought nothing of inviting me to Halifax for a couple of pints of beer and good talk at a Halifax pub where a folk band was playing. This being 1996, the Quebecois referendum was just behind us, but the whole world lie before us.

Thanks to BayofFundy.com for the image of the bore itself.