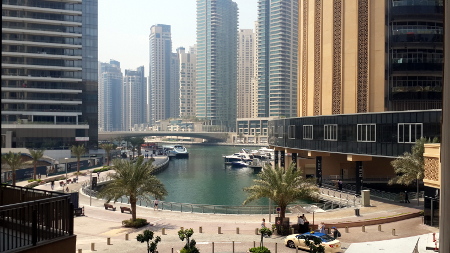 It was late 1992 and all my thoughts were on graduation and the wide world that awaited me; even Ithaca was starting to seem small and I was itching to finish my formal education and get out into the world for some “informal education.” Evenings I took my passport from the drawer and examined it, took my backpack out from the closet and walked around wearing it, testing, probing. In my journal I listed places I’d like to see, adventures I wanted to experience, and laid out my hope that I’d travel far and wide, and my fear that I wouldn’t.

I read those old journal entries again for the first time in ages. And to my immense satisfaction, I read them while visiting Dubai. Imagine, the Gulf States, drenched in Arabic lettering and the architecture of the Middle East. Better still, I’d gotten there from Uganda, our new home. Better still, I’d soon be returning to a wife I met in Central America and kids raised in Francophone Africa. How immense is the world, and how endlessly fascinating and satisfying.

The same could be said of Dubai.

On a video conference, I’d caught my Dubai colleague drinking from a paper, coffee-shop coffee cup. “Oh yeah,” he told me, “Dubai is the real world.” Other friends told me similar: it’s clean, everything works, it’s a mecca of international shopping, taking in elements of Western Europe, Asia, Africa, and the Middle East. I also heard the place is an immense fashion show, where everyone turns out dressed to impress.

I learned a few other things about Dubai the few short days I was there. The above all seemed to be true. But I also learned: 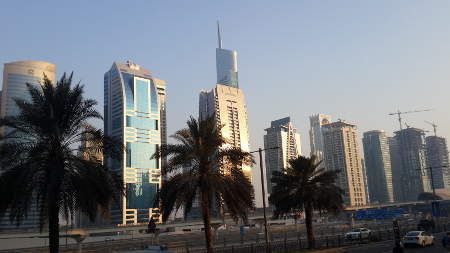 But if I had to sum it up, I’d say, take the extravagance of Manhattan, but build everything anew, and using modern materials and systems. Dubai sparkled, it really did. And secondly, build the city on the basis of calculated financial risk management and the extensive input of architects and engineers. After living for so many decades in places where engineers seem to be an afterthought and designs are rudimentary, poorly thought-out, or haphazard, to walk the streets of a city where the planners and designers seem to have had the upper hand was spectacular.

Not that I walked, of course! Nobody does. I went from air conditioned car to air conditioned hotel to air conditioned shopping center to air conditioned office, and back. Dubai was blisteringly hot, and I was there in the cool season. I can’t imagine living there. But if I could go back to 1992 and reassure my 21 year old self that I’d indeed travel the world, it would perhaps give that young adventurer some peace the next year or so in Indonesia. All he’d need to do is divest himself of a few careless, romantic decisions, and the rest of the world would soon await his curiosity for exploration. Alhamdullilahi.