I was in Kolda, in Senegal's Casamance region, waiting for sundown and the cool of the night. A rustling in the treetops surprised me, and looking up, I watched four shadows go leaping from the branches of one tree to another. Primates! Turned out, the shadows comprised a family of monkeys, and they seemed to be pretty much at home in the trees of the hotel. Who knows, maybe they were there first! Who cares, though: after so many years at the edge of the Sahel, disappointed with the paucity of wildlife and the encroaching of the desert, it was a thrill to be face to face with some happy-looking animals. 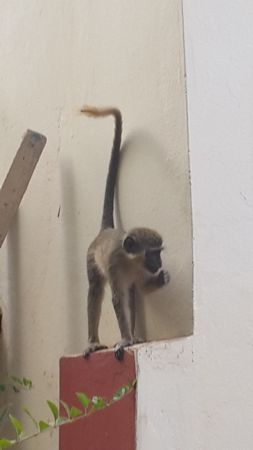 One approached, begging for scraps (further proof these particular monkeys were well accustomed to life at this hotel). He was bold, even brazen, and when it was clear I wasn't going to feed him, he turned his attention instead to the an air conditioner unit halfway up the hotel's wall. It was an easy jump for him, and from there he effortlessly bounced to the next unit 10 feet away by springing laterally off the wall. An incredible display of poise and agility! But scratches and grooves in the concrete wall showed he and his friends had been making that particular jump for ages, as though it were an established route! From the A/C he bound to a perimeter wall, and then back into the forest, where I hope he stays happily to the end of his days.

I'm no primate specialist, but as best as I can tell, these little fellows were Cercopithecus sabaeus, the Senegal Green Monkey (Sabaeus monkey, Callithrix monkey). If so, photographer Ignacio Yufura has posted a spectacular image of one at his site (highly recommended). Here is wishing them good health and strength.