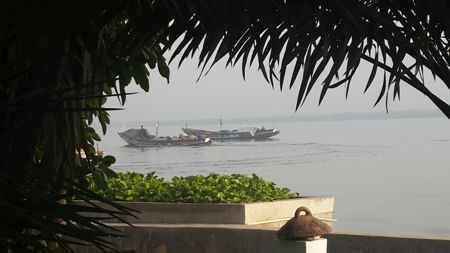 Of course the Casamance has its own name: though technically it’s part of Senegal, it’s not just another region, it’s practically another world. And that yin-yang of belonging while remaining separate is at the heart of the Casamance experience.

We flew into Ziguinchor in a ten-seater turboprop under whose spinning propellers I watched pass the Petit Cote, the dust-strewn roofs of Banjul, and then the yawning, immense Casamance itself. The Casamance River twisted and snaked back on itself through a labyrinth of mangrove thickets, brackish backwaters, oxbow lakes, and broad silty plains riven with the tracks of animals crossing what might have been hardpan dirt or meters-deep quicksand, all in a landscape that spanned from horizon to horizon in infinite flatness. If the bold landscapes of mountain ranges speak of majesty, flat riverine landscapes whisper “impermanence.” The river moves from year to year and season to season, haunted by the ghosts of swollen rainfall or the pressing heat. As it writhes, the stains of salt trace its thrashing, and trickles of rainfall cross the mudflats to join the watercourse, lined on both sides with the emerald greens of the young mangroves that will ultimately strangle them. At the edges, small villages and the squared plots of subsistence vegetable farms crouch, speckled with the canopies of the infinite trees that make not forest but savannah. How to build and plan when everything is in perpetual motion, and always will be? 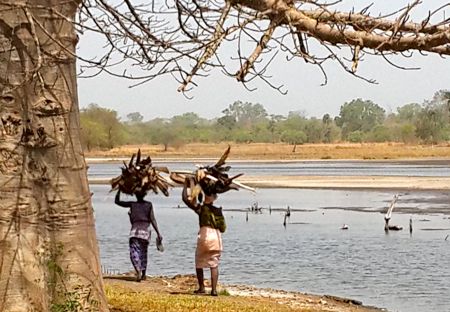 We landed, and the pilot came around to throw the door open. A blast of humid air flooded the cabin with the smell of vegetation and moisture. The Casamance. How can this possibly be part of the same country whose Sahelian pre-desert landscape I was wandering just weeks ago?

The Casamance – whose very name betrays its Portuguese origins (“The Peaceful House”) – remains a sliver of society pressed on the north by the bulbous, intestinal tract of the English-speaking Gambia, and on the south by the Portuguese-speaking Guinea Bissau. To the east, it also shares a border with French-speaking Guinea Conakry. But ethnically, it was – and still is – essentially part of what’s now called Guinea Bissau. No wonder then that I learned as much about the Casamance while traveling in Bissau as I did in Senegal. The city in which we spent our first two nights (Ziguinchor) comes as well from the Portuguese: “Chego e Choram” (“I arrive and they cry,”) the arrogant declaration of the first slave-trading explorers of this waterway.

But in my opinion it was the French settlers who brought on the madness, by forcing their early colonial settlements south of the river into the land that would eventually become Guinea Bissau, and then fighting for that grim slice of territorial expansion. When European governments met to decide, the French got the Casamance slice off the top of Guinea Bissau, and Bissau was “compensated” by getting a slice, in turn, of Guinea Conakry at the south. Divide the region along ethnic lines and you get a totally different map. The Casamance remains to this day, culturally part of Guinea Bissau, but geopolitically part of Senegal, which struggles to integrate it because of the cultural boundary but also because the English stuck the Gambia in between the Casamance and the rest of Senegal. No wonder the Casamance is a place unto itself. And a fascinating one, too. 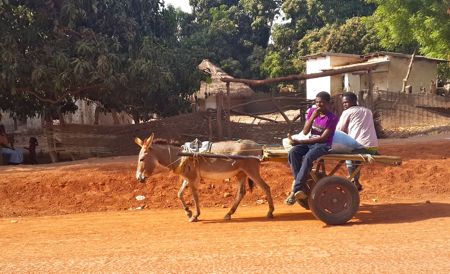 We traveled by car the length of the Casamance, departing just after breakfast, as the river emerged from a morning haze that only slowly revealed the far banks. Birds called from the canopies of the massive mango trees that blanket the area, but the air was thick with the smell of rotting vegetation and moist earth. We stopped again and again, for bounding goats, wandering cows, and the occasional road-traversing pig. We shared the road with donkey carts carrying all manner of merchandise and straw and usually driven by small kids; usually a happy dog trotted alongside. As the rising sun clipped the shadows and as we left the coastline, the landscape began to change around us. At first the horizon was a mirage of treetops, distant hardwood forests or knots of mangroves. The savannah crept in, a carpet of sharp blades clipped short by cattle and evanescent in every possible combination of grey-green-yellow ever seen by human eyes, ringed by individual coconut palms that stood like soldiers, and the massive Baobabs whose presence among the fields was wizard-like. Only after spending significant time in the Sahel can you begin to appreciate the immensity of the trees. Left unmolested to grow to their natural shape and size, they towered against the sky: stands of mango trees standing cathedral-like and hanging thick with ripening fruit, Neem, breadfruit, and Cashew. Underneath them pools of shade harbored resting farmers, troops of goats and sheep, and happy, fat cattle. Nowhere else in Senegal have I witnessed any of those things – and especially the shade!

As we left the coast behind us though, the landscape dried, and so did the smell. The thick, red African dust grew more oppressive, and our cars kicked up huge plumes of it into the roadside vegetation. The river pulled back from the roadway and with it went the mangroves and the grasslands until we were in some sort of thin, dry forest. So, too, went the neat Diolla gardens, replaced by little villages of the round, thatched-roof huts of the Peulh. The Casamancais are among Senegal’s poorest, but with poverty comes a relative dearth of the plastic litter that fouls the rest of Senegal’s landscapes. Instead, I saw neatly swept courtyards separated by sheafs of plaited, rattan fencing. From the treetops Vervet monkeys leapt from branch to branch and occasionally leapt down to earth to dart across the roadway in a sort of audacity that stood my hair on end every time. 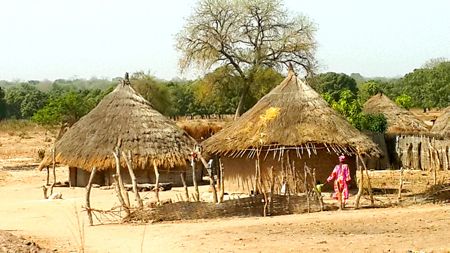 Traveling in the dust at the tail-end of the dry season is deceptive: the deep channels we crossed had clearly been cut by raging rainwater, and I knew firsthand the rainwater can rise knee-deep before it makes its way to the sea. That the land and the sea are so close here, that they’re so entwined, and that they’re both so transient and impermanent, make the Casamance what it is. Never mind the long-running separatist rebellion, the landmines, the economic struggles: You’re just here on earth for a while. Then the river moves, the rains flood or stop, and you are done. In the short term, you don’t need much: a plot of land, a roof of thatch over your head, the comfort of your family, and the knowledge that on this trip, everyone is together – and everyone is alone. In the Casamance, like anywhere, our isolation and our connection make us who we are, here in the peaceful house.