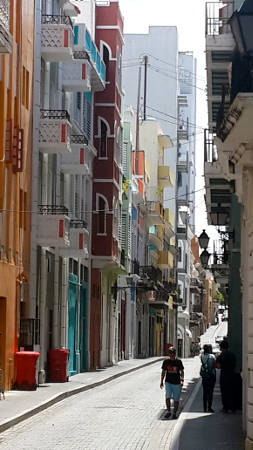 The best thing about the folks of San Juan, Puerto Rico is their accent: a lot of them sound like me. That is, they've got a New York accent. That changes everything. In fact, Puerto Rico is practically unique across the Caribbean for being an American territory with strong American connections but a culture and history rooted in the Spanish empire as well, and an island that reflects both.

Miguel took us across town in late morning. "Any earlier and the traffic will kill you," he explained. "It's bad and getting worse" We spent a good deal of time waiting to cross intersections anyway, gazing out at architecture that looked kind of like South Florida, but – amazingly – cleaner and better kept. But it was clear the island is struggling, ad we read it in the papers too: to call Puerto Rico's current situation as a 'slump' would be an understatement. That would explain the continued emigration to places like New York, where well over a million Puerto Ricans join the 3 million that stayed behind. "New York's Puerto Rican community is famous," Miguel explained, adding, "Know the other big center of Puerto Rican emigration? Orlando." And then with a smile and a strategic pause, " That's right: Mickey Mouse eats beans and rice"

That same sense of humor took us around the rest of the city. We popped into the Congressional building to admire the architecture and to buy a raspado, the shaved ice treats we know so well from Nicaragua too. Across the street, set against the gorgeous, azure background of the Caribbean, was the statue of San Juan (Saint John the Baptist), Puerto Rico's patron saint. "Nice statue," said Miguel. "But check this out; we drive another bit down the road, and ... look again!" Saint John's upraised arm took on a different aspect from this view. "Looks like he's flipping Congress the bird!" Miguel laughed. "Well, they deserve it!" That New York accent. 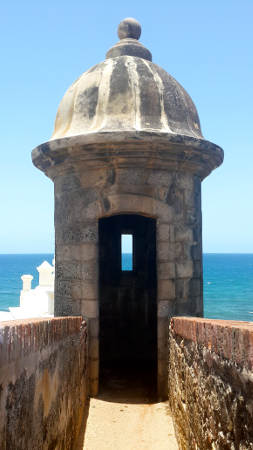 I asked about the question of statehood, given the economy. Miguel shrugged. "The old people prefer the status quo," he said. "They're not sure there's anything to gain from statehood, and lots to lose. The young people, on the other hand, prefer statehood and are tired of second class status. They don't realize once you become a state you have to start paying for things you'd been previously getting for free." I pushed, but Miguel didn't want to commit one way or the other. Times were tight and there were no obvious solutions: the situation of most countries I've visited or lived in over the past twenty years. "You see, we're halfway in between," Miguel said. "Take units of measure. Back in the 70s the USA decided they were going to move to the metric system. So we did too. Then the USA gave up. But nobody frikkin told us! Now we're a mess:

We measure distance in miles but height in meters; we take our body temperatures in Fahrenheit but measure the air temperature in Celcius. We buy flour by the pound but cement by the kilo, and we buy milk by the liter but gas by the gallon. Now what?

Anywhere else, it would've sounded like a complaint. In San Juan, it comes across with a sense of mirth, or as we say in New York, "so waddayagonna do?"