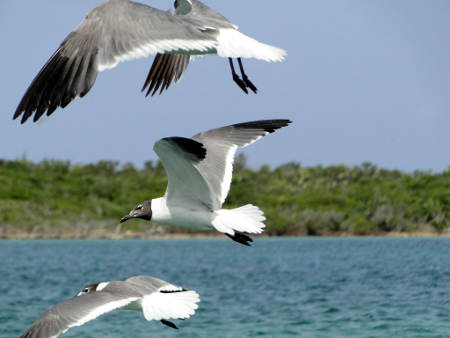 Turns out, good branding matters, even in geography. Don't believe me? Ask someone currently trying to get by while living in Dildo (Newfoundland and Labrador), Crapo (Maryland), Boogertown (North Carolina), Hellhole (Idaho), or Drain (Oregon). There are others, of course. So it is that the little stretch of sand and sea once known as Little San Salvador has done much better with the relatively more evocative name of Half Moon Cay. That's what I was thinking when I awoke to find our boat rocking gently at anchor off the sandy crescent of Caribbean goodness on which were to spend the rest of the day playing and exploring.

The island was the sort of place you'd otherwise sail by on the way to a more obvious destination, but it had a lot to teach us. We trundled past the sugar-sand beaches over the crest to the island's central lagoon, where we explored in a small boat over upside-down jellyfish, conch shells, abandoned fishing lines, sea slugs, and the like. Over in the shallows the water was barely ankle deep, and the low tide was just starting to turn. We passed the lagoon's mouth where cold water was beginning to pour in from the Atlantic, dark and clean on the horizon beyond the whiteness of the breaking waves, and our Caribbean guide taught our kids how important the lagoons are as breeding grounds for small fish, and therefore the central role they play to the Caribbean ecosystems. We also passed over a school of chum fish swarming, and from the treetops at the lagoon's edge the Laughing Gulls came in looking for a snack. I snapped this photo of one, black-headed and with wing tips that looked like they'd been tipped into a bottle of ink and then washed out with flying. They were gorgeous and so silent that as they flapped by I caught just the whisper of their wings beating. They say their name comes from their peculiar call, but I never heard them make a peep: too busy keeping their eyes trained on the swimming lunch below, I'm sure. From Hemingway's Islands in the Stream:

They came in toward the line of green keys that showed like black hedges sticking up from the water and then acquired shape and greenness and finally sandy beaches. Thomas Hudson came in with reluctance from the open channel, the promising sea, and the beauty of the morning on deep water, to the business of searching the inner keys.

Having just watched 1492 again, starring Gerard Depardieu, I got thinking about the other San Salvador, the Caribbean island now thought by most to be Cristopher Columbus's landing point in the New World after his first cross-Atlantic sail, and how much has changed since then. At one edge of the sandy lagoon was a replica of an Arawak camp, a reminder of a people so long-gone and who have left behind so little. Most of what we know about them comes from the careful observations of Cristopher Columbus himself, which is amazing, when you think about it. Same goes for the Lucayans' ancestors, the Tainos, who probably moved northward from indigenous Venezuela. They're all long gone, and this island at least is run by a conglomerate of major corporations stuffed with lawyers and planners. Even the locals were imported, from neighboring Eleuthera, which I'd visited sixteen years previous. With good marketing, you can make anything at all happen. But leave those breeding fish alone: they've got plans of their own.

As for the Laughing Gulls, I've got a sneaking suspicion they're laughing at us.