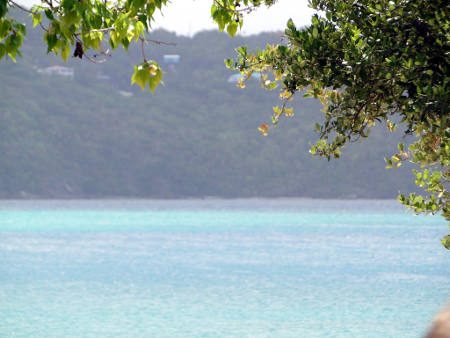 We raised Saint Thomas on the Caribbean horizon before dawn, and by the time the sun was rising, the air was full of bird calls and we were docked in the magnificent harbor of Charlotte Amalie. The Caribbean, the deep Caribbean! And one of the splendid Antilles Islands, to boot!

I will remember the island for its greenery, especially as seen through eyes that have spent too many years in Subsaharan Africa and the dry Sahel. We traveled across the island's spine to a bay by the name of Magen's Bay, reputed to be among the Caribbean's finest. That required mounting the island's wooded interior to the summit, and descending through forest to the Caribbean's waters on the other side. The forest was stunning: redolent of rain and loam and peat, and buzzing with life under the thick, dark canopy as if this little corner were untouched. It's untouched only because it's been preserved, of course, but after years of life in countries where the landscape looks worn to the bone, I'll take 'preserved' gladly.

We swam for the better part of the morning in waters so transparent you could see the sandy bottom with ease. But as I struck out to cross the bay by following a line of buoys, suddenly the sky darkened, and in seconds the water's surface was speckled with the plink-plink of fat raindrops. I was halfway out, so I was going to get rained on no matter what, so I resolved to just enjoy the moment. Warm water below me, cool water falling on me from above, and across the entire ampitheater of the wooded valley that cradled Magen's Bay in its fingers, the squawk of calling birds. A few minutes later, the cloud passed and the sun came back out, and the hillside was shiny with reflected raindrops.

As we packed up to leave, we crossed paths with an enormous iguana in a tree branch, who'd been watching us the entire time we'd been swimming. I guess he'd been seeking shelter when the cloud passed, and decided to stick around long enough to dry out. That bay was his before we got there, and would be his again when we departed. In the meantime, thanks for the hospitality, brother! 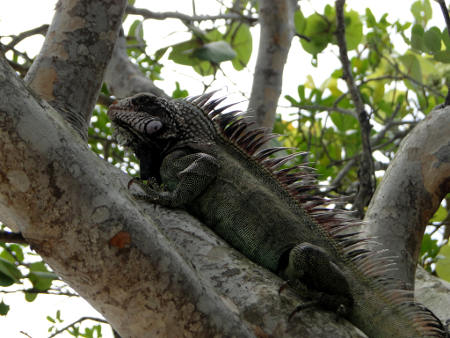