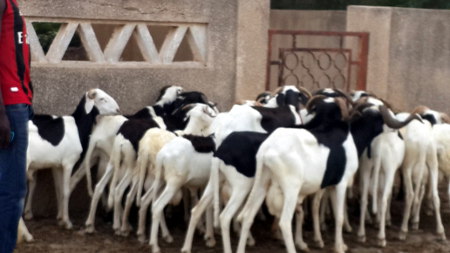 Today is Tabaski, the biggest festival of the year in Senegal. In Arabic it's Eid al-Adha (The Festival of Abraham), and commemorates the moment where, called by God to sacrifice his son Ismael, God sent a ram and Abraham sacrificed it instead of his boy. Muslims sacrifice a ram each year in remembrance.

You can tell Tabaski is coming because you see lots of sheep being transported back and forth: on the roofs of cars, hopefully trussed down under a rice sack, leaving them to admire the countryside, chewing their cud, as they whizz down the highway; also on motorcycles and not infrequently between the legs of the cyclist as he navigates Senegal's crazy traffic. You also start to see sheep tied up to a tree outside the richer households, where it's a not-so-subtle display of wealth and a frequent target of theft.

I'm not a fan of the festival. Never mind I like those cute sheep, and you don't just buy a frozen turkey but rather buy the live animal and slit its throat yourself, which is a bit too much for this suburban Westerner. But the next day there are bits of carcass and fur littering roadsides and above all the beach, where lazy Senegalese have jettisoned them. I'd expect a healthy trade in sheepskin leather goods after the festival, but no. Still, it has given me an insight into an aspect of the culture that is instructive.

I got a sense of the breadth of the sheep market when traveling last week in Saint Louis, where the side streets were awash, nose to tail, in the black and white Ladoum sheep that are preferred in Senegal. Herding the sheep were lots of Senegalese of course, but many men bore the blue cloth and turban attire of the Mauritanian people, who I learned come to Senegal en masse to sell their sheep. I suppose the Senegalese pay a better price for the animals. Briefly, I thought of trade routes that presaged modern nation states and borders. There's also a huge influx of expatriate Senegalese who return to Senegal for the festival from Europe, the way Americans return home to celebrate Thanksgiving. Many of them buy a car in Europe, ferry it across to Africa at Gibraltar, and drive it through Western Sahara and Mauritania to enter the country, sell it, and fly home. The highway that borders Mauritania (I'm helping rebuild it, actually) was swarming with customs officers flagging over unplated- or foreign-plated vehicles to check those cars had paid their customs duties. I learned the Bissau Guineans also travel north to buy their sheep in Senegal, perhaps because the competition is better.

Senegal's annual Khaar Bii ("The Sheep") competition is a big deal during Tabaski: the competition for the best Ladoum sheep. The Ladoum has been selectively bred over the years by the Senegalese for traits they find important: fast growth from birth, a reasonable height, and more meat than wool. They are priced better (often $200) than the lower class breeds, like Peulh-Peulh ("property of the Peulh people" - the nomadic and stateless shepherds of the Sahel), the Mauritanian Touabir, or even the Nigerian Wali-Wali, all of which are sold on the streets of Saint Louis and Thiess.

There's one other aspect of Tabaski I like: traditionally, the Senegalese consume a third of the meat from the ram, and share the rest. It's also tradition to invite a Christian or two to participate in some tacit proselytizing. It's harmless and comes across as a brief sharing of a family meal. We've been to Tabaski feasts before, and they're an outpouring of hospitality. There are many opinions of Islam circulating, the radical douchebags of the Middle East are doing no favor to Islam's reputation. But the Senegalese, with their quiet hospitality, remain cultural ambassadors of repute. Pity about those cute sheep though.

More at wikipedia and Aramco World.