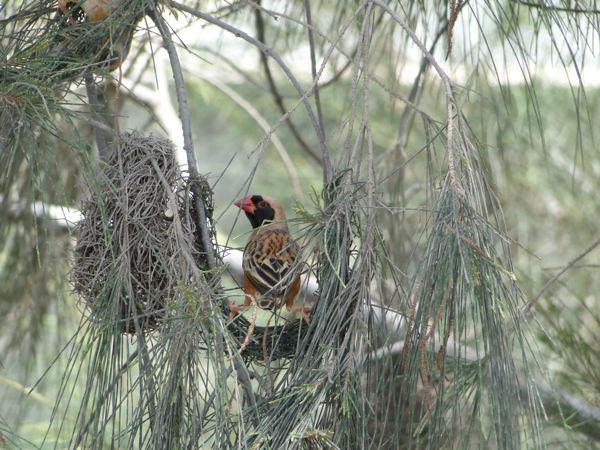 The Queleas arrived in mid-summer as the temperature in Dakar ramped up. Uninvited but hugely welcome, they have been an entertaining part of my mornings and evenings until the rains came and chased them away.

Chatty little things, several dozen Queleas began setting up shop in the Casuarina trees in our back yard, twisting and weaving bits of grass and needle into bowl-shaped nests that hung from the branches. They were so intensely chirpy that the neighbors complained, but what was not to like about so much energy and activity outside the windows? And their industry and perspicacity were a welcome respite from life in human West Africa. 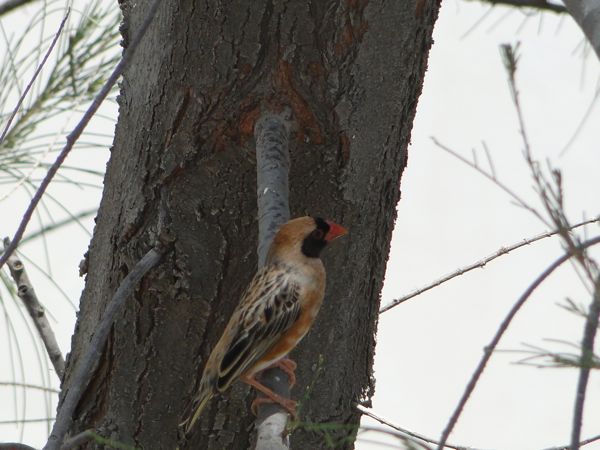 According to Borrow and Demey, the Red-Billed Quelea (quelea quelea) is highly gregarious, found sometimes in very large flocks, in grasslands, ricefields, open savanna and dry Acacia country. They utter rasping and squeaky chattering, esp. at their breeding colonies. And the map shows, delightfully, that they are more common in the Senegal River and Gambia/Casamance river valleys than along the Atlantic coast and certainly in the city. So we've been lucky - maybe even blessed.

Unfortunately, I never saw any baby queleas emerging from the nests. And when the rains came, they moved on to more interesting grounds. I was glad we crossed paths.