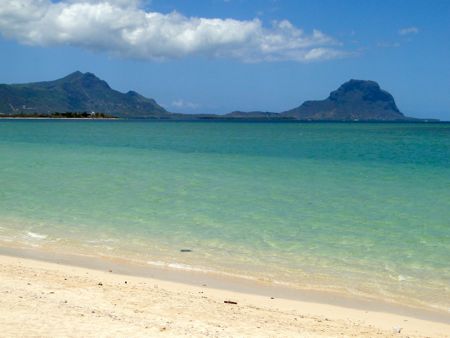 Far better, and just a couple of kilometers south along the coast, was La Preneuse. Named for a French warship, the sandy beach was decorated with a couple of remaining cannons, and a thick, stone tower sat just behind the fringe of trees – both relics of a naval era of centuries past.

La Preneuse had the advantage of sweeping views along Mauritius' southwest coastline all the way down to Le Morne Brabant, a mountainous horizon at the far end of turquoise splendor, and it was hard not to get swept out to sea while admiring the view.

Our requirements in travel destinations change when we travel with little children. Ten years ago the club scene at Flic and Flac would have been a thrill, but in the company of a two year old, what we most wanted was a place where Valentina could rest from the sun, where the waves weren't too strong or the currents too dangerous, and where we could beat a hasty retreat back to our room for naps if necessary.

La Preneuse was all that and a fantastic view as well.