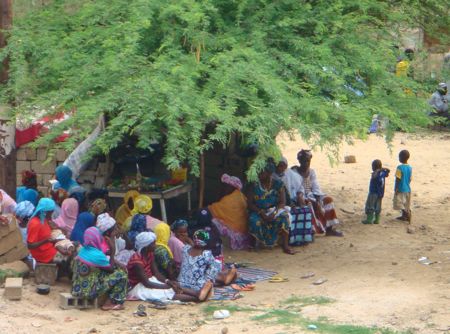 Call it a lesson in the obvious, perhaps. I've had the pleasure of living among squatters, and my eyes have been opened to what squatting really means in West Africa. Our neighbors on two sides in Dakar have set up home on vacant, yet-unbuilt lots. They are camps of families and acquaintances making their homes on lots otherwise undeveloped. They organize themselves around sources of water when they are available, keep their sheep, build small cooking fires, socialize ... and then they are gone.

Back in the States, homelessness invokes images of vagrants sleeping in parks, victims of a failing economy, substance abuse, or unfortunate circumstances. But we have no question over who owns what, where land is concerned. Such is not the case in much of the developing world, and Francophone Africa is particularly vulnerable to incomplete or competing land registry systems, including many traditional or village systems, that make it close to impossible to know who owns the land.

Add to that extreme poverty and urban migration, and you've got squatters. The word is pejorative, but I've had the pleasure of living among them, and my eyes have been opened to what squatting really means. 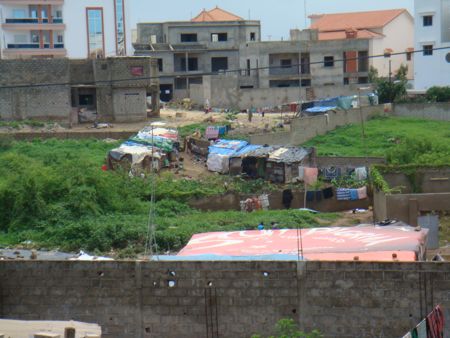 Our neighbors on two sides in Dakar are squatters, camps of families and acquaintances making their homes on lots otherwise undeveloped. They organize themselves around sources of water when they are available, keep their sheep, build small cooking fires, socialize. One guy builds out a little shop from flattened barrels and becomes our source for phone cards (credit), sugar, and salt. The neighborhood kids get their candy there. Another woman develops a niche business selling hot meals to the night guards stationed outside the houses of the wealthy. They tell me she's a great cook. Later I learn these squatters aren't even Senegalese, which explains why they don't understand a word I say in Wolof. They've come north to escape the troubles in Guinea (Conakry), and probably speak Peulh.

The men find jobs as laborers in the burgeoning Dakar construction business, the children don't go to school, and the women make do. Their homes are square huts, built from old wooden concrete forms, flattened barrels, layers of black plastic weighted down with big rocks. The better off take the time to pour a concrete slab so they aren't sleeping on the hard earth. Inside is a cot with some blankets, some cooking pots, a shard of mirror for shaving, and some other necessities. But not much.1 You could scarcely hope for more peaceful or respectful neighbors. With the exception of a single, barky mutt, they are easy to have around. Then we spend three weeks away from Dakar, and when we return they are gone.

Turns out the lot has been bought, or the owner has finally marshaled the resources to build out his property, or has now gotten the necessary permits. And everyone living there has been uprooted, the land dug up, and rebar-reinforced concrete is going into the trenches. Where have they gone? Some of them combined into another camp not far away; the others, I couldn't say. But they are gone.

That makes it obvious why they don't build out better homes than that, why even pouring a concrete slab is a risk with quite an expense associated with it: if the owner shows up, you lose your slab. And that brings home how crucial land tenure is to the world's poor: if you don't own where you build, you can lose the little you have.

And there it was: on about the 26th, someone from the Mayor's office came out and painted red Xs on every structure considered illegal, and gave the people four days to move out. No one budged: why should they? That threat had been levied many times before. Only, this time the threat was real. On Sunday morning, the first of February, a bulldozer showed up and smooshed the entire squatters' neighborhood to bits. It took less than half a day. No one was hurt, which is amazing considering the chaos. And the Guineans frantically climbed up to try to salvage what bits of plastic and steel they could from their dwellings. As the smoke cleared, there remained nothing more than splinters.

I noted they were able to get all their stuff out of their houses pretty quickly. But heck, they don't have very much to move out of the way. The house itself is what matters. That night, I found them squatting around campfires where their homes used to be. Some moved, perhaps. But a week later, I notice a few new shacks right where the old ones were removed. Where else can they go? 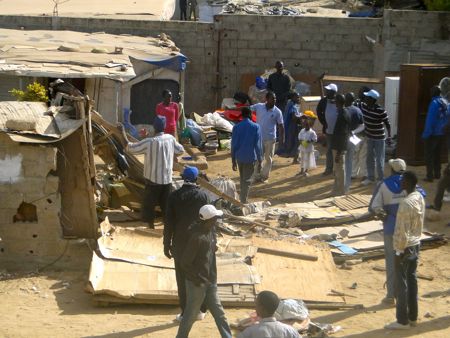 1) Interestingly, but not surprisingly, among those possessions is frequently a cell phone or two. They're cheap to buy here, as they are throughout the rest of the developing world, and cheap to operate. And they do more to keep the poor in touch with each other, share job opportunities, and remain informed, than the Internet ever will. How do they keep them charged? From the electricity in my garage, with the complicity of my night guards, who run a little charging operation (for free, hopefully). It costs me nothing, so I don't mind, and hopefully earns me a bit of karma, which frankly, I could use.