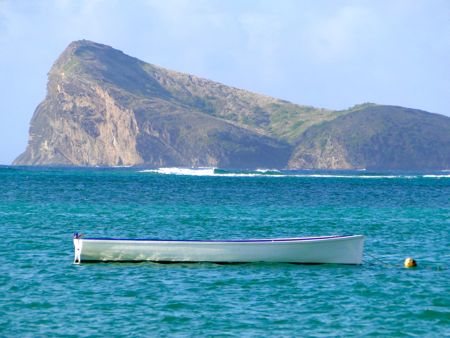 At the north end, we visited Cap Malheureux, the "Cape of Disgrace", witness to an untold number of shipwrecks during the age of Napoleon1. The bay was jammed with pleasure boats, mostly for nearshore fishing, none of which seemed overly unlucky to me, and in the channel before the immense offshore islet called Coin de Mire ("the Gunner's Quoin [sight]")a red-sailed dhow zipped across the wind, a sudden reminder we were again traveling in the Indian Ocean. 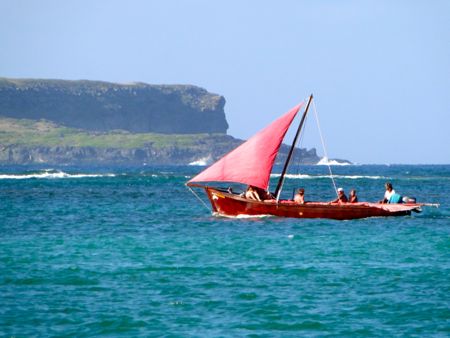 We experience islands differently in an age where we arrive in a jumbo jet at the international airport, and drive a rented car, landside, to the points that caused sailors such distress in centuries past. These days Cap Malheureux' most important landmark isn't a series of treacherous reefs and tricky-to-navigate currents, but rather a lovely little red-roofed church, hosting a wedding the afternoon we were there: a young Mauritian woman in a white dress waited with family to enter the church; through the open windows wafted fresh summer air – a lucky start to married life indeed!

We spent a few nights in Péreybère, a sleepy little settlement betting on tourism. Mornings the catamarans and trimarans coasted up to the shore to take on passengers; we opted for a shorter cruise by motor over the reef, where we could see the fish through the boat's glass bottom, and admire the coral formations from which they darted. That same reef two centuries ago would have been a hazard; now it was a destination, and a fun one at that. No bad luck at all. 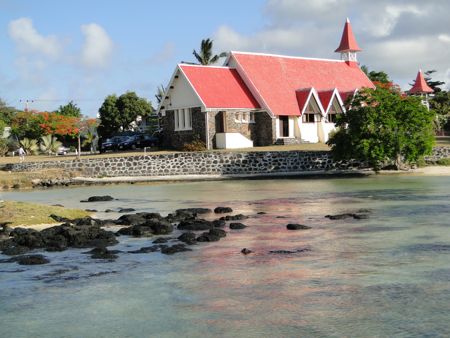 1. I had to wonder about all the shipwrecks at Cap Malheureux. I was thrilled to find a modern nautical chart and was hard pressed to find the difficulty in navigating that channel. Perhaps the name came about from the British navy landing there during the Napoleonic wars, leading to eventual French loss of the island in 1810.