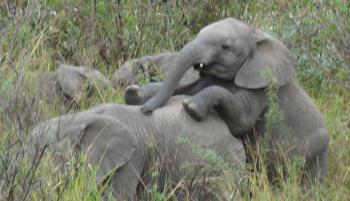 We reach the Masai Mara just before nightfall, at the end of a road that degenerates from bad to just about non-existent. "We've taken a shortcut," says Peter, who is at the wheel. It was uncomfortable but afforded us some time in the Masai villages, among dark eyed women toting bundles from straps that stretch from their foreheads and tall, dark warriors wrapped in scarlet cloth, daggers gleaming from their belts. Cattle is their life, and their cattle are sleek and gorgeous.

We spend the evening with our newfound traveling friends and break camp in the early morning for the amber rolling grasslands of the Masai Mara. There, the challenge is choosing in which direction to cast my gaze, because there is vibrant, scintillating life on all sides of us. We stumble upon a cheetah early on, already chewing deeply into the meaty hindquarters of a young impala. She looks up only long enough to survey her observers, and returns to her meal satisfied we are no threat, which we are not. We find elephants everywhere, traveling in small herds with their young. They astonish us in their ability to remain invisible despite their bulk: they are the color of shadow and as silent as a memory. 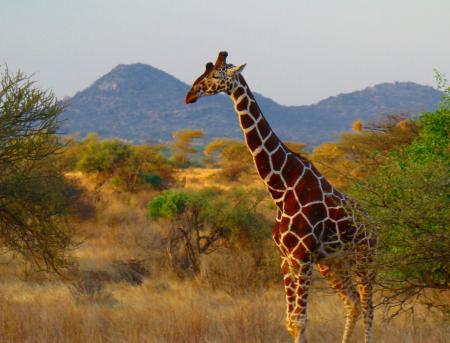 Also silent are the giraffes. We discover three separate kinds of giraffe during our stay in Kenya, and none has a voice. Though they seem ungainly while still, they move with a grace and fluidity much greater than their form suggests. I enjoy them as much as the zebras, which watch us shyly through dark eyes, tails swishing.

The Masai Mara itself is a phenomenal backdrop for its exotic and amazing denizens. The color of the grass is fluid as the sun slides from one horizon overhead to the other, slipping through myriad shades of yellow, green, and gold. The horizons are broad and open, and the sky overhead is immense. From our vehicle we can see for kilometers and yet we only perceive a fraction of the life that surrounds us. Still, it is there: velvet monkeys in the treetops, gorgeous sapphire-colored birds flitting from the branches, gazelles bounding across the hillsides.

Its most blatantly visible aspect is the wildebeest migration, which we are lucky to be present for in August. They are too numerous to count, but form a shaggy river the color of espresso, streaming over from a distant valley and preparing to swim across the Mara. The sound of their hooves tramping, calves with their mothers, no obvious leader and yet moving in a coordinated way that resembles a river of flesh, forms the drumbeat of the plain. They have traveled north from the Serengeti, and in a few months will return to where they began, and no one knows why.

Download a video of the wildebeest migration (MPEG format, 3.4 MB)

Just before lunch we drive out to a hillside on the other side of the Mara river where we find a pride of lions devouring a wildebeest. The lion cubs are feeding greedily, jaws still dripping with blood, licking their jowls, fuzzy soft ears twitching. The female is splayed contentedly on a rock overlooking the valley, her mate crouches in the high grass and watches us with a wary expression of irritation that commands respect.

The image I carry back out of the Masai Mara is of the young, for we saw them everywhere: elephant calves play wrestling each other, jostling with their trunks, jackal cubs too busy playing the jumpy-bitey game we recognize from our own Afri-mutts to prowl, lion cubs feeding, baboon young hitching a ride on their mothers' backs or riding suspended from their mothers' warm bellies. We observe zebra colts still fuzzy-eared, grazing with their herds and the fuzzy round heads of cheetah cubs watching us from the safety of a far-off rock, still warm with morning sun.

With no exceptions, the animals we see are healthy and well-fed, from gazelle to oryx to cheetah to dik-dik to ostrich to hawk. Even the Masai, who we encounter briefly, seem to be doing well overall, and their cattle was gorgeous down to the very last head. We are not doing badly either, supping at the end of the day back in camp. The long Masai Mara day has drawn to a close, and tomorrow the animals of the African plain will go about their days as though we had never existed - just the way it should be.