The hillsides were dry, but the little shade afforded by the almond and guanacaste trees threw into relief the concrete statues placed by the former owner: he'd reconstructed Nahuatl and Chorotega statues turned up in Ometepe and the Amerrisque mountains bearing tribute to Nicaragua's pre-Columbian history. But he'd done versions of the Buddha and a crucifix or two, as well, so the trail down to the water felt something like a parade-ground of historical dignitaries.

In Nicaraguan Spanish, prefixing "Re" adds emphasis to a description, so Remanso must be extra "manso" or calm. And a remanso is just that, an eddy in a stream where the water is more still. That was the case for El Remanso, a bay just south of the bustling San Juan del Sur, protected on two sides by rock walls and letting in a beautiful little learner's wave to pile up on the shore. In sum, except for the penetrating April sun, it was a place of peace. 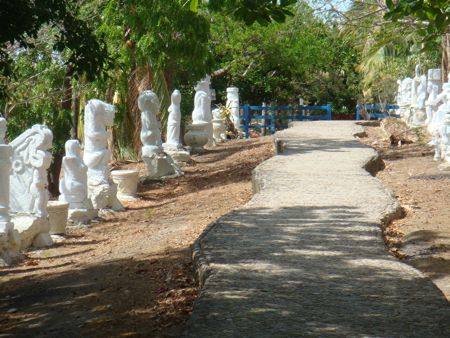 At around the time I was writing the first edition of the Moon Handbook, El Remanso was just another quiet bay, with a decent wave perhaps known only to a few intrepid locals. Four or five years later it was subject to a sharkpool of speculative realtors as Nicaragua's real estate bubble took prices through the roof. The speculators had all closed up shop though, and what was left was a quiet bay of some older American and Canadians who had settled to spend their retirement years in relative tranquility, and a few car loads of San Juan del Sur travelers who arrived each day at near-high tide to enjoy a decent wave.

After the sun turned under the horizon and the stars came out, there was nothing left out there but the call of night-birds, and the signal on my shortwave radio. And out in those trees, a sloth or two, gazing down on the silver Buddha with a knowing eye. 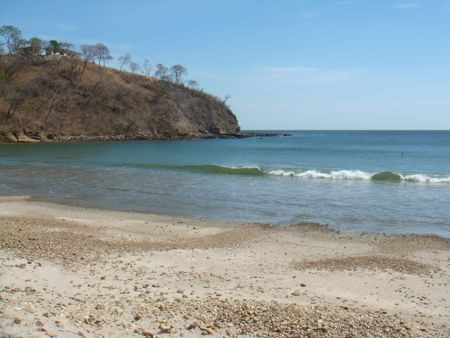