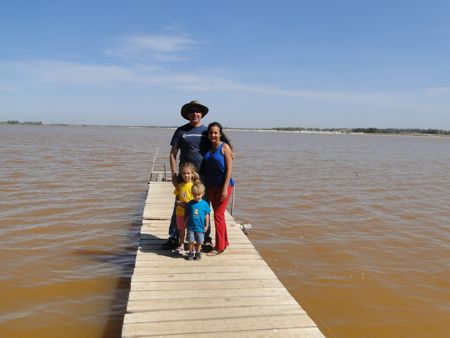 Not far northeast of Dakar on the Cap Vert peninsula is Lac Rose, a shallow freshwater lake that decades of evaporation have converted into a salt pan whose color is somewhat pinkish in the right conditions of sunlight. We went to go have a look.

We went as much to enjoy a day outing as to debunk this picture posted in Reddit; it's obviously been photoshopped six ways to Sunday. But hey, the Internet is a huge bag of lies, right?

The lake gets its color from a high concentration of Dunaliella salina algae, its shallow depth, and the high salt concentration. But it gets its fame from the famous Paris-Dakar rally.1 This is where the rally would end, and sure enough, the restaurant where we stopped for some yassa poulet was scrawled on all sides with the slogans, team member lists, and some creative black-marker drawings of the teams that had celebrated their successful desert traverses. At the water's edge, some hopeful boatmen approached to offer us a tour of the lake, but with small kids the noonday sun seemed like too much, so we opted for an expresso instead, in a restaurant whose shade came from a banana grove. The sun was really strong, a combination of "day at the beach" and "day in desert sands", as the colors washed out around us. 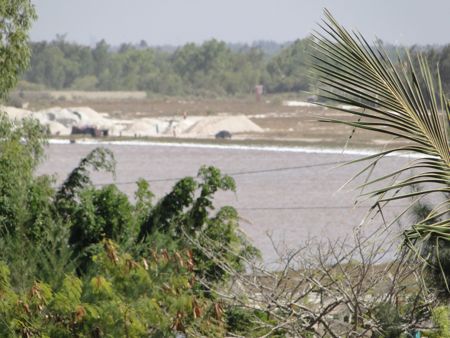 I always feel in places like this that I learn more about the French than I do about the Senegalese. Senegal benefits richly from tourism, but it's a unique sort of traveler that spends concentrated time here, and having worked with the Senegalese for several years now, I see how they bend themselves a bit into a form the French traveler expects. Everyone gets a bit more "Bob Marley" for one, and spouts "traditional wisdom" in a way that sounds like it might just be made up on the spot. There's a sudden emphasis of aspects of regional culture (camels, Tuaregs) that seem more natural just a bit north, and so on. But why gripe about it? The kids had fun banging on the drums though, and enjoyed themselves running up and down the sand dunes until they got cranky.

1 The Paris-Dakar rally now takes place in Peru, after the Senegalese decided they'd had enough of rowdy 4x4 drivers crashing through their fields and after rowdy Mauritanian insurgents made the Western Sahara route untenable. There's still a number of cross-desert rallies though, as about twice a year the streets of Dakar are choked with Mad Max-esque road warrior vehicles and sunburned, middle-aged Frenchmen. And over in Peru, I gather the locals aren't too fond of the rally, either.