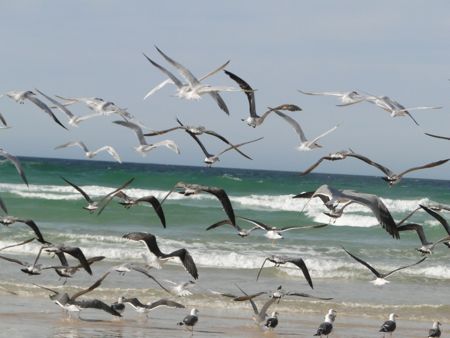 Lac Rose was only a couple of kilometers away from Dakar, but given urban traffic/chaos, dusty back roads, one main thoroughfare blocked by a day market, and another closed for construction, it took us over an hour to reach. Surely there was an easier way home? There was, once you put on your lucky adventure hat.

Lac Rose was only a couple of kilometers away from Dakar, but given urban traffic/chaos, dusty back roads, one main thoroughfare blocked by a day market, and another closed for construction, it took us over an hour to reach. Surely there was an easier way home? There was, once you put on your lucky adventure hat. 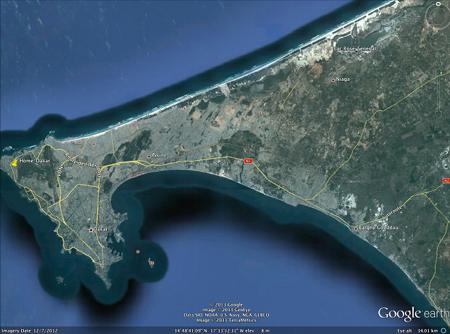 Have a look at the map. The Cap Vert Peninsula isn't too long, and you're never too far away from the water. And Lac Rose was spitting distance from the Atlantic. The locals told us they usually prefer the ride along the beach, which is shorter ("only twenty minutes to Dakar!") and more pleasant. For the right sum of money, one enterprising local offered to "guide" us back. Driving an older model 4x4, and not feeling as well-prepared for the off-road adventure as I'd have liked, I was reticent. But my friend coaxed me into it. "Better to have a disaster in caravan" I thought, as we released some air from the tires and prepared for the trip. The kids were excited, looking out the windows at the sand dunes and the few camels arranged for tourists ("They may well wind up towing us out of a hole" I thought.) And then we were off! 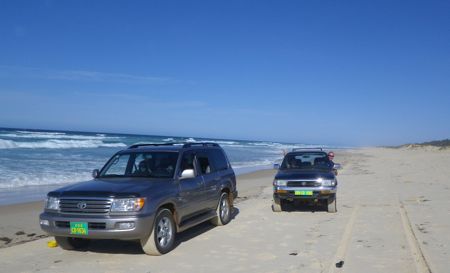 We thundered across the soft sand towards the ocean, and lumbered our way down to the low tide zone, where the wet sand was more compact (it's a bit of an art, you see: go too low and the sand is so wet you sink in; go too high and the sand is fluffy and your wheels dig in). My tide watch confirmed the tide was half-low and falling, the perfect late-afternoon condition for a beachside excursion. Should we have trouble, we'd hopefully have enough time to get help before the rising Atlantic swept our 4Runner out to sea. 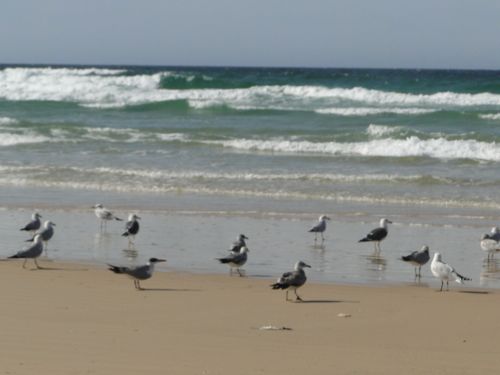 As we made our way west and as the 4Runner generally held its own in a combination of 4-High and sometimes 4-Low, I began to relax and enjoy the ride. Out Ericka's window came the rushing sound of splashing surf, and off the port bow were scrubwood forests, dunes, and lots of bright, soft sand. In the late afternoon sun, the water swelled from turquoise to indigo to light shades of green, and sea birds frolicked in the foresplash.

As we left the bounds of civilization, we traversed a somewhat empty stretch where flocks of black-backed gulls, red-beaked terns, and plovers looked out to sea. They spooked as we drove by, filling the air with the thump-thump of beating wings. The afternoon turned golden, and the kids counted waves from their seats behind me. 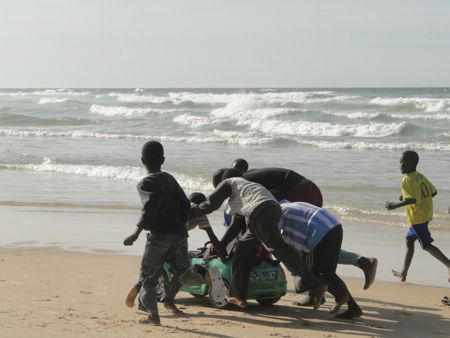 It wasn't easy. I was all too conscious of the squeaking of rubber tires failing to get purchase in the sometimes-soft sand, and nowhere was the beach free of the detritus of human occupation. Throughout the entire trip we crossed over plastic bottles and bags, bits of scrap iron, rotting clumps of abandoned fishing net, and worse. We crossed over three major sewer outfalls: the worst of the worst. Not only did it involve fording a wet and potentially treacherous ravine of soft sand, but it was clear something not too far removed from raw sewage was pouring into the Atlantic. Yuk. (Sorry, birds). 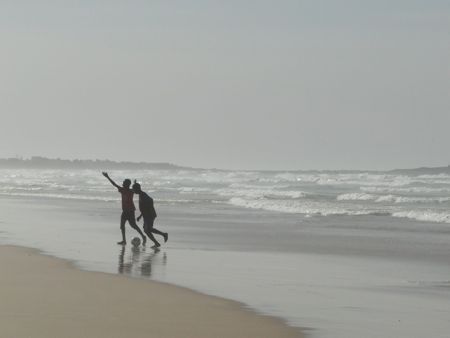 Then, we were approaching the outskirts of Dakar, namely Grand Yoff and the Parselles Assainnies. The beach was broad and flat here, and the sand was siltier and harder. We passed endless soccer matches, and couples lounging in the dunes. Kids chased each other in circles or splashed in the waves. It was a nice day. Twenty minutes later (wait, wasn't this supposed to be twenty minutes total?) we were back home, and I was hosing off our vehicle and reinflating the tires. It had been a lovely adventure: the best kind.