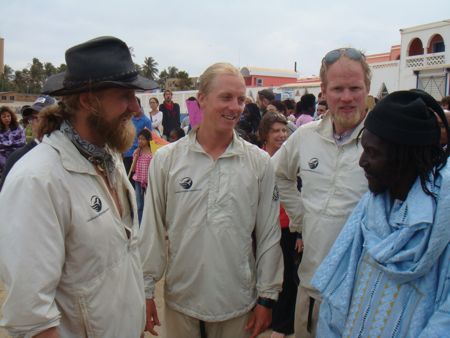 Bravery is relative, as is adventure. In Indonesia, I climbed volcanic Mount Batur before dawn, and reached the summit feeling triumphant only to find a Balinese 10 year old had done the same, wearing flip-flops and carrying a case of soda on his head to sell to us. There's always a team braver than you and it's inspiring to meet those who coax you into discovery and adventure. In Senegal, that team was OAR Northwest. 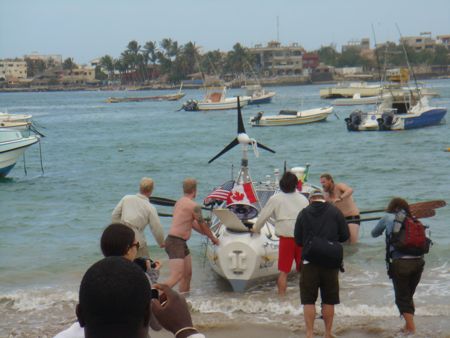 A team of experienced and passionate rowers, including one Canadian Olympic gold medalist, OAR Northwest hails from the Vancouver/Seattle area, and rowing small craft for enormous distances is what they love to do. I'd heard about a team of rowers arriving in Dakar; the American Ambassador had hosted them for a meal at his residence, and we were all invited to send them off. Their departure was delayed though until it fell during business hours, and of the Americans in Dakar, I was one of few who could attend because they launched a block away from my office.

It was hard to reconcile the size of their craft, the James Robert Hannsen with the immensity of their goal: to row from Dakar, West Africa, to Miami, Florida, crossing the entire Atlantic Ocean under the power of their oars. The Hannsen bobbed in the tussled waters separating Ngor beach from Ngor Island, hardly bigger than the wooden pirogues the Senegalese use for inshore fishing. The team gave a brief and excited departure speech, dropped trou, and swam out to to their boat. And then they rowed off into the distance. They'd barely made it to the surf flanking Ngor before they were hard to see. And then they were gone.

Have a look at their website, as I do every morning now. They've given lots of explanation of what they're doing and why, and they plan on measuring lots of things as they traverse the Atlantic to provide a better scientific picture of parameters like salinity and current. The water is only inches beneath their feet, so they're well placed to do it. So the mission is scientific and educational, but it's also deeply personal. I wish them the best. 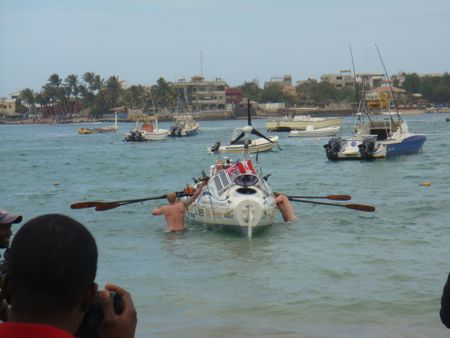 I feel like I know something about the trip, having been an armchair adventure nose-deep in countless stories of round-the-world sailing adventures. Sailing Alone Around the World by Captain Joshua Slocum is easily my favorite, and even that tale sends shivers down my spine with mention of ferocious seas, high winds, snapped timbers, and the like. And he was in a larger, stronger, higher craft powered by the wind, not by his back. Every morning I wake up, survey the weather and the seas, and remember that four men whose hands I shook find themselves totally exposed to the elements out there, trying to reach the Americas under their own power. I find that inspiring, and deeply frightening. It's been a week now, and they have yet to reach the Cape Verde Islands: they've got a long way to go.

Wish them luck and safe passage, and follow them with me.