The literature from the local chamber of commerce all pointed me to Roche Percé (“ Pierced Rock”), the photogenic monument standing off the coast of the Gaspé peninsula. Indeed, Percé’s high arch permitted small boats to sail right through what could only have been a monument to the struggle of forces that defines nature and humankind. But my own map was leading me farther afield to Île de Bonaventure.

A national park and wildlife refuge, Bonaventure is uninhabited by humans and hosts instead the colonies of tens of thousands of breeding gannets, a masked and garrulous seabird that helped pull the plug on the massive use of DDT for organic pesticides (a study from 1968-1984 showed their declining population was a result of thinning eggshells weakened by the use of that toxin). From the boat’s small wooden dock I tramped up over the island to the edge of the breeding colonies, which had been carefully roped off by Canadian park rangers. The cacophony of so many squawking seabirds was deafening. If they were aware of the human audience that watched from behind the treeline they made no show of it. If you only breed once a year I guess you make an effort not to be distracted.

Gannets breed on grassy platforms on cliffs high above the sea surface. I watched dozens of gannets swoop in from the sea, coasting into the crowd with the precision of F-14s landing on aircraft carriers: wings spread, feet down, head into the wind. The azure sky was cloudless on all sides, which brought out the whiteness of their feathers. Only their heads were a rustier color, and more impressive still were their piercing blue eyes. 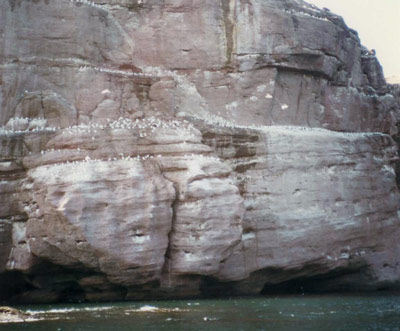 The Northern Gannet occupies the hard rocky edges of the continent for its breeding ground, and what I was watching would be repeated the following August, as it had been repeated for millennia. Gannets return to the same nest every year, overlooking the sea through those sharp eyes, and traveling farther afield when the conditions were good. I felt a strong empathy for them, and a vague sadness they were confined to such a limited, isolated space on earth.

It was that sense of isolation that had drawn me to Bonaventure in the first place. An island at the end of a peninsula, thrust into the cold waters of the Gulf of Saint Lawrence, and surrounded on all sides by emptiness. These are the corners of the world that draw my attention on the map. The Atlantic runs strong in my blood as well, and I left Bonaventure and its loud denizens only because I had noticed something more exciting still. Dead center in the cold Gulf of Saint Lawrence, a handful of lonely islands formed the pivot to the entire gulf, an island of lobstermen far away from everything. These were the Madeleine Islands (Les Îles de la Madeleine), and they would be my last adventure before I turned southward and returned home.

Hinterland’s Who’s Who - the Northern Gannet