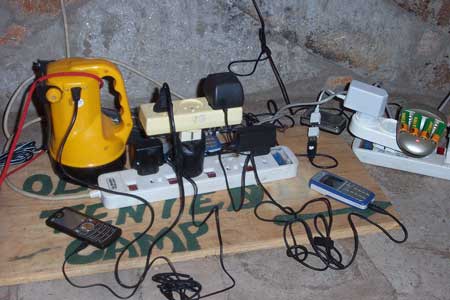 It's been two hours since the sun set over Kenya's Masai Mara, and deep in the African savanna our little group of safari goers is settling into our tents, shaking out our sleeping bags, and looking over our gear. Other than the rattle of crickets in the underbrush, there is practically no sound at all, with the exception of ...

the 10,000W diesel generator blasting dark, acrid smoke across the camp site and pumping desperately coveted electrical current into a set of surge protectors and the unbelievable diversity of chargers, battery packs, and electronic devices that needed charging. We don't travel the way we used to.

In 1993-1994, when I traveled through Indonesia I had no electronics at all on my person. In fact, with the exception of a fountain pen and a flashlight, I had nothing more complicated than a paper journal. Five years later I was planning for a long term and simple, rural lifestyle. When I departed on that adventure in Nicaragua, I had a portble shortwave radio, and a couple months later I found a clever recharger for NiCd batteries.

But the scene in Masai Mara surprised me. Our team was travelling with dozens of cell phones, mst of whch were capable of receiving their digital signal throughout the game park (one of our traveling companions took a call from Wisconsin from the bank of a river swarming with hippos and crocs), digital cameras, video cameras, GPS units, and perhaps more.

And in the Seychelles, when I let myself go wild with the electronic gadgets, I found to my surprise I was carrying two digital cameras (one for wildlife photography), a digital video camera, the shortwave radio, my Psion, the two charger units for the digital camera (because Sony can't seem to use the same battery charger from one camera model to the next), the charger cable for the video camera, and a charger for the NiCds that run the Psion and shortwave radio. Clearly that is a bit over the top, and I haven't even bothered to carry a cellphone (I am definitely, absolutely off line) or ipod!

We are increasingly addicted to our electronic toys, or at least, I am. By way of justification I can at least claim that I used and was grateful for each of those gadgets. But watching the stars circle over the Masai Mara under the roar of the diesel generator, I have to wonder what we are giving up in exchange for all that we gain.