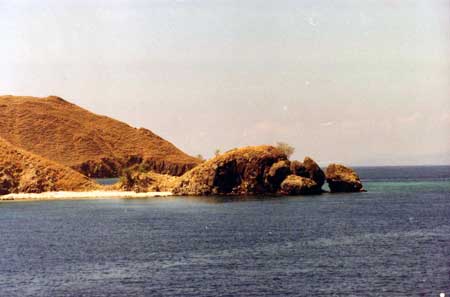 July 1993: The ferry from Bali slipped from the dock just after noon, under a bright tropical sun. The engine's low thumping barely penetrated the din of the passengers. With my back against a steel support, I opened my journal and enjoyed watching my Parker fountain pen lay out a thin blue line across the page as effortlessly as the wake the ferry drew across the Lombok Strait. It was an impressive passage. The channels that separate the islands of Indonesia are not all that deep in geological terms, with the single exception of the narrow tongue of water that separates Bali from Lombok. During the Ice Ages when Indonesia was a dry range of mountains running down a long peninsula, Bali remained separated from Lombok by a 600 meter deep channel of water. It is now known as the Wallace line for the 19th century naturalist who identified the geological reason for the distinction in flora and fauna from Bali to Lombok. A contemporary of Charles Darwin, Wallace "observed that on all the islands west of Lombok are found tropical vegetation, monkeys, elephants, tigers, wild cattle and straight-haired Asiatics, while on the islands east of Bali are thorny arid plants, cockatoos, parrots, giant marsupials, and fuzzy haired Papuans, all typical life forms of Australia." To me the Wallace line was little more than a mid-day ferry ride, and a landmark on an adventure that drew me in the direction of the rising sun.

We disembarked in Lombok and I walked the empty streets of Praya under the noontime sun while the locals rested in the shadows. The Indonesians enjoyed saying only mad dogs and foreigners walk around in the bright noontime sun, and in Praya it rang particularly true. Lombok a decade later would be called the "next Bali" by tourist promotors drunk on the vision of staggering profit, but in 1993 it was still somewhat sleepy, a pale, dry shadow of Bali so divergent in character and landscape it made the claim preposterous. But I wasn't far enough off the map yet. The true adventure was clearly off the shore of Lombok itself, in a handful of islets called the Gilis. I found my way by horse cart (dokar) down to the water's edge with a cadre of fellow backpackers in dusty sandals and worn-looking backpacks looking for passage across.

At a sandy spot on the shoreline where the boatmen pulled up their wooden craft onto the sand - the original meaning of the Portuguese "Praya" and now the name of Lombok's provincial capital - we negotiated passage out to the Gilis. My traveling companions were two Dutch, a Canadian, and a German, all exploring quickly before returning to university in the fall. But I for one was glad to not be returning to university in the fall; I'd graduated with a strong inclination to eschew higher learning for lower learning, and Indonesia's streets and country lanes bridled with more than enough to capture my attention with a passion I'd recently lost for libraries and written assignments. I was glad to be out living my life, grateful to be living it in such exotic surroundings, and excited to think that just over every horizon was a new adventure waiting. Standing with the waters of the Lombok Strait lapping around my bare feet, that was more true than ever.

At water's edge we transferred to a little wooden outrigger canoe with a 150cc motor jutting off its side. But we waited there on the hard benches, straddling our backpacks and applying fruit scented sunscreen to the back of our necks while we waited for enough passengers to fill the boat, as our driver had no intention of leaving until we were crammed three-to-the-seat even if it meant keeping us there all evening. But neither was he going to run the risk of letting us out of the boat for us to change our travel plans and go elsewhere. So there we sat. Just short of an hour later, as the afternoon shadows lengthened over the water, another horse cart, or maybe the same one, rattled down to the water's edge and discharged another load of travelers, and a pair of Indonesians headed out to the islands to work the hotel scene. They joined our boat, taking us well past the dangerously-overloaded stage, and our driver pulled the ripcord on his little Evinrude and nosed the boat out to sea. I looked over the rows of the boat and calculated that back home we'd have said the boat could handle 20 passengers, seated two per row along the 10 parallel wooden slat seats of the craft. But we were 25 plus bags and must have looked like a pack of matches with little pink faces spilling from the edges of the little paper package, anxious to keep our bags dry and our boat upright. Somehow, we managed not to swamp the little craft.

The water was perfectly still as the afternoon breeze quieted. Glasslike, the turquoise water grew deep and dark and we sped like a skate over ice on a sea that reflected the pinkening clouds above towards the little islets by the name of Gili. It had been a hard day's travel over a handful of forms of transportation, but as Gili Trawangan loomed closer and I caught sight of the little stands of palm tree leaning out over the sea, it all seemed worth it. I was nearly totally off the map, on an island off of an island in an archipelago on the other side of the world from home. I was traceable only by the unnumbered ticket stubs of a half dozen lethargic bureaucrats, and the memories of a dozen bus drivers, horse cart drivers, and train conductors to whom I looked like every other Western tourist they'd ever seen.

Gili Trawangan was practically a sandbar. A solitary, sandy track followed one length of the beach, turning upwards at the north end of the strip beyond the guesthouses and the thick stands of coconut palms, where it climbed a little hill for a gorgeous panorama of the archipelago and the coral reef that encircled it. Feeling adventurous, I eschewed the guest houses en masse and settled down under a blanket on a little bamboo platform by the water's edge. It seemed unused, but in hindsight, it was folly: absolutely nothing qualifies as "not used" in Indonesia, or anywhere else in the developing world. But that night no one seemed to care that a scrawny traveler with dusty feet had pushed his bag up onto the bamboo and settled in for the night.

That night's meal was tuna steak in a spicy sauce, and afterwards I tucked in for the night. It was a long night: I was eaten alive by mosquitos and slept in fits under the clear starlight and the sound of the faintest of breezes rattling the treetops. I awoke at dawn as the islet came to life and the splash of the little waves washing up on shore was met by the crow of chickens and the sound of the village waking up. A kindly Indonesian from the guesthouse (losmen) in front of "my" little shack found me there and took pity on me. "You slept here all night?" he asked, "sayang sekali" ("too bad"). I didn't have the heart to specify I'd done so on purpose because it had seemed adventurous and because I had been too cheap to pay the prices of the local establishments. Sheepishly, I accepted the cup of warm tea he brought me, ashamed at my own parsimony confronted by such good-hearted generosity. It was a lesson I would learn several more times as I traversed Indonesia.

I spent a lazy day snorkeling around the reef, enjoying the feel of the tropical currents pulling my body along the edge of the beach while the sun slowly toasted the unprotected skin on my back, and then started looking for a way to get back across the little strait to Lombok again. The trip was rapidly getting easier. My bag was lighter, the road was more open, and on all sides the horizon was broad and unfettered. Stretching the map out before me in Bali I suddenly saw it clearly in a dizzying rush of blood. From Bali it had been an easy jump by passenger ferry to Lombok, and from Lombok it looked like an easy jump to Sumbawa, and by hopping islands I'd work my way down the Nusa Tenggara (the "southeast archipelago," a name that could easily have applied to the entire nation of Indonesia. As we raced back across the water to the "mainland" of Lombok, I thought about how deceptively complex the world had become. The simple pleasures remained simple, and by stripping away life's excess it was easy to again remember what was important and what was not. For the moment, everything I needed in life was on my back, and the world around me was broad and exciting.

Note: This is an excerpt from Sandal Footed on the Ring of Fire, a memoir currently in course.