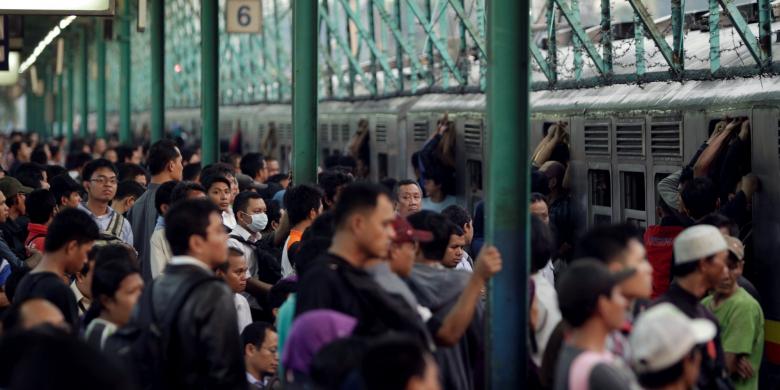 I'd traveled to Indonesia alone, and had landed only hours ago, toting nothing but a huge, wheeled trunk carrying my belongings, and a camper's backpack with the rest. I spoke good Bahasa Indonesia but was a fish out of water otherwise: disoriented, traveling for the first time ever, and in a country so non-Western as to be totally confusing in ways you'd never experience on your first excursion to a place like Spain. I'd gotten myself from the airport to the train station only to be told I couldn't travel with the trunk, which was too heavy and would block the aisle.1 They gave me the address of a freight forwarder, and suggested I take the Jakarta inner city rail across town to get there. OK ...

The rail was chaotic, filthy, stifling, tropical, and run-down. I barely knew what I was doing, but managed to buy a ticket, dragged my heavy stuff down to the platform, hauled it up and through the door. The tragedy of the early days of travel is fear: is this the train where you get knifed? Your stuff taken from you at gunpoint? Are you on the wrong train, and headed into the depths of some Stygian nightmare from which you'll be unable to extract yourself? Are they watching you right now? Should you be afraid? And if so ... of what?

The wagon was packed as commuters and travelers got on and off. I counted the stops remaining until I'd reach the industrial park of my stop. Hawkers came on and off, selling peanuts, cigarettes, candy, bags of drinking water (but mostly cigarettes). And then it happened:

Across the way in my wagon was a young boy traveling with his mother, and when the water seller came on board with a bucket filled with plastic baggies filled of water, he bought two, and then shyly brought one over to me. I managed a limp terimah kasih, unsure if I should pay him, give him something, or do something else. He smiled at me, his mother smiled at him and then at me, and we went separate ways. I never saw him again.

I don't know to this day why he took pity on me, other than that he was a good person willing to share a kindness. And I've spent so many years through the rest of my life with people far wealthier but far less kind. These sorts of moments are few and far between. That's one of many reasons they are so worth hanging onto.

Here's wishing each of us a Jakarta train.

1 I discovered later – one of many things I'd learn as my years in the developing world accumulated – that a few crisp bills pressed into the right palm would've nullified that bureaucratic worry instantaneously. But hey, I'd have missed out on this adventure!

Thanks to Kompas for two images of crowded, Jakarta railcars. Obviously, given the situation, I didn't take any pics myself. Kompas is a great news magazine and I read it myself back when I was studying the language ...