Writes Stuart Butler, “On one side [Porto Novo’s] got Cotonou, its younger, upstart neighbour 40 minutes to the west who’s gone and stolen all the facilities, all the jobs, all the entertainment and all the hopes; and an hour to the east it’s literally chewed up, mashed about, digested and chucked back up by the immense belly of the city that is Lagos. But Porto Novo isn’t overawed by its constantly growing cousins; in fact it just sits there coolly claiming to be the capital that it is not. And it’s all the more endearing for it.”

I don't know about "endearing." But it's certainly an interesting place. The Portuguese sailed past the port entrance at Porto Novo in 1473 in their progressive journeys along the African shore searching for a sea route to India. The Dahomey people were established there at the time, but the Portuguese took little interest until the 1600s when the slave trade became a profitable venture. The Portuguese and later other European nations began to settle into Porto Novo (“the new port” in Portuguese) to do business. It remained a central part of the region of Africa then called Dahomey, But as Cotonou grew in importance – particularly after the construction of the magnificent pier in the early 1900s – Porto Novo began to fade. 533 years after the Portuguese first landed, I passed through for a look. 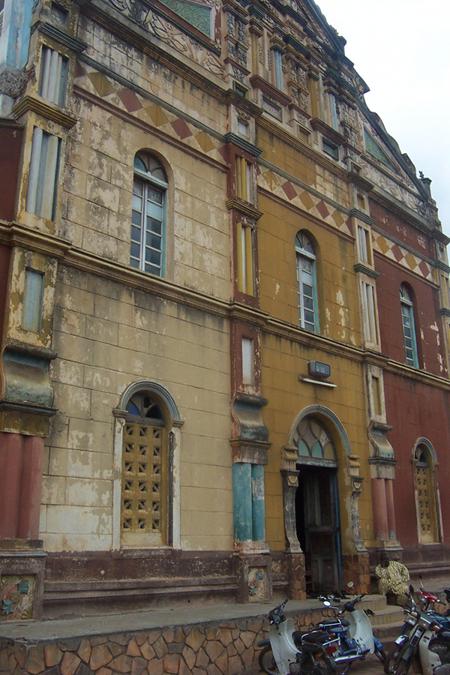 Porto Novo’s charm is in its old architecture, much of which has been inspired by the New World and transported by freed slaves returning from Brazil. Most interesting was the Grand Mosque, a restored church built in the Baroque style and painted in a color scheme that legend says came from the churches of San Salvador de Bahía in Brazil. The adjacent market pushed so close to the mosque's sides the two seemed juxtaposed, even synonymous.

But the town was run down over all, and with the exception of a couple of important government buildings, like the Supreme Court, its dusty streets seemed unloved and somewhat forgotten. Missing was the swarm of zemidjan traffic, the bustle of young men hawking merchandise from streetside, and the sirens of the presidential motorcade.

And it was dusty – as is history.