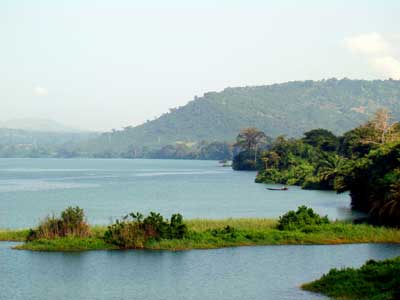 Lake Volta: I've never understood why such a salient geographical feature could be such a relatively untouristed region of Ghana. My friend Daniel first piqued my interest in a slide show that included an image of Lake Volta, much larger than I'd expected, and more beautiful. But the Bradt Travel Guide to Ghana says "Largely shunned by the package tourist industry -- it has been estimated that less than 5% of visitors to Ghana enter Volta region -- this scenic area is increasingly popular ... " It made a natural destination for me.

We drove northward and upward to Ho in the early evening, pleased to headed to the highlands and away from the sweltering heat of the coast. After nearly a year and a half living in Cotonou, visiting hill country is a rare luxury. A nearly full moon the color of peach wine rose over the Togo-Atakora range that stretch northeastward along Lake Volta's eastern flank all the way north to Pendjari in Benin, which we visited earlier. But what I'll always remember was the splendid and remarkable silence, because with the exception of the bird calls from the tree tops, the night was silent.

The following morning we visited Akosombo, at the dam that makes Africa's largest artificial body of water possible. Like many of Africa's major geographical features, Volta -- once the Rio Da Volta, " the river of the turn" -- was named by the Portuguese explorers that mapped the coast of West and then Central Africa. It became a lake in 1961 with the construction of the 370m long earthen dam inaugurated by Ghana's leftist president Nkrumah. Besides the interest I had in seeing it due to my experience working with the US Army Corps of Engineers on large civil works, we are personally affected even a day's travel away in Cotonou, as the dam is the source of hydroelectric power for much of Benin, and when the dam under-produces, which in recent years has indeed been the case, Ghana and its foreign customers -- like the Beninese -- go without electricity. In November of both 2006 and 2007 that has indeed been the case, and the rolling blackouts make life in Cotonou a great deal more difficult.

We'll return some day, and when we do we'll cross Lake Volta in the MV Yapei Queen, the ferry that has traversed Lake Volta since the lake was first created. But that enticing adventure will have to wait.