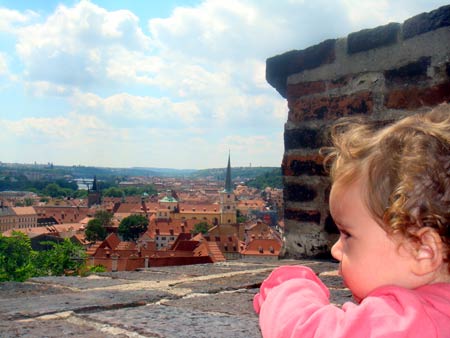 The Czechs are without a doubt the most friendly and welcoming people I've met in the past decades. We found them sharply dressed, good natured, and kindhearted. We never set foot in a street car without some person leaping immediately to his or her feet, offering a seat to the tourist family traveling with an 11-month old baby. We bought some baby clothes in a little shop not far from our hotel, from a woman who insisted on giving Valentina a gift as well; and even the ticket collector on the street car took the time to give us a smile and wish us well in his city. Lots of other cultures, including my own, could take lessons in hospitality from the Czechs.

The architecture paled, in my mind, beside the vibrancy of the music: we found playbills announcing different concerts in just about every quarter through which we traveled, and I had the pleasure of attending not just a classical guitar duet but also a presentation of Anton Dvořak's New World Symphony, without doubt my absolute favorite classical work (naturally, they played Smetana as well, and it, too, was stunning).

Expat friends derided the Czech cuisine, but I found it enticing: a 15th century banquet of meats (particularly duck and roast pork) with gravies, whole grain breads, and sweet, dark beer. Surprisingly, it was usually cheaper than eating in Cotonou (well, perhaps not so surprising: Cotonou imports everything, including the milk). I was goaded inexorably towards Pilsner Urquell , a classic Czech brew I liked less than the several dark beers. Here too, we were impressed by the generosity and pleasant nature of the Czechs, who found us tables that would suit our infant daughter and attended to us with an obvious pride and pleasure I found amazing.

Early evenings are when the city most evoked the illusion of walking through the pages of a Milan Kundera novel (I'd read both The Unbearable Lightness of Being and The Joke before coming), but although I looked everywhere for confirmation we were beyond the footprint of the old Iron Curtain, In Prague I failed roundly. I found instead a glimpse of the wry Czech sense of humor (to be fair, Kundera certainly employs that trait is his writing too). The old statue of Lenin was cheerfully dynamited a decade ago: a 10 meter high stone structure where Lenin stood grimacing over the high banks of the Moldau, four proletariat behind him. The Czechs called the statue "waiting in line for meat," and laughed that Lenin was at the head of the line. But the Cold War is rapidly becoming the leitmotif of a generation whose time has passed, and the streets are full of mini-skirted consumers chatting on cellphones and drinking lattés.

Finally, we found the city clean, green, and well-tended, and replete with flowers. Prague was instantly likeable, and its people made our first real contact with the Slavic world a favorable one. One travels for many reasons, and we were mostly grateful to momentarily live in a place full of towering trees, green grass, and broad parks with fountains to splash in. That the Czech were such wonderful hosts simply drew emphasis to the attractiveness of this Central European city.