North Carolina's Haw and New Hope River valleys were formerly prone to horrific flooding. The hurricane of 1945 was one of just many hurricanes that laid siege to what was already a poor valley, putting it under water. The US Army Corps of Engineers came up with a plan to flood it permanently, offering a mechanism of flood control and providing hydropower for electrification of the region. When it was done, Lake B Everett Jordan had become a permanent fixture on the Piedmont landscape.

As is the case with any dam project, flooding the valley meant doing away with a couple of small towns and their infrastructure: roads, bridges, buildings. And a section of railway had to be rerouted. Vestiges of all that stuff still remain if you know where to begin looking for it.

And lately, looking for it has become my favorite weekend passion.

The map that led me to Beaver Creek showed that the railway once passed down one slope and followed Jordan Lake's current shoreline before emerging on the north. But satellite images revealed buried treasure: on both sides remain bits of road that once connected but now lead sadly past water's edge down into the deep. I had to go. 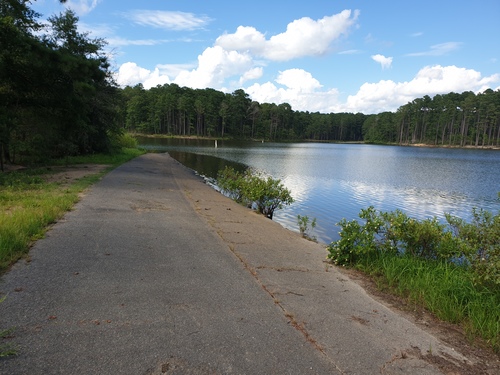 Never mind the awesome sight of mankind's handiwork being swallowed under the waves, or the melancholy landscape of a road that leads only to destruction. Look out across the still waters remembering it was once a farming valley, that a culvert of some sort still lies submerged somewhere out there, that lives that once traversed the valley now circumnavigate it.

Some day soon we'll drive past parts of Florida, New York, Virginia. And the roads that once led to places people call home will instead plunge under the waves that rose to put our cities underwater. And the vestiges of our pride will flap from the water's surface like the drowned stumps of forest that still dot the corners of Jordan Lake.