I had traveled across town for a meeting, and back out on the street found the local bank machine wouldn't accept my card; stupidly, I'd set out in the morning without drawing some cash at the hotel. And out on the street I had no access to wifi, so my phone was useless to call for a ride. I hailed a few cabs, all of whom roundly refused to carry me for the cash I had on hand. What to do?

I crossed the street and decided to take the bus. Why the hell not? My Amharic is still in early days, but I'd begun learning to read it, and the word Kazancis - my destination - was one of a few words I could recognize with ease. I scanned the dozens of minibuses scooting by until I found one whose placard bore the word I was looking for:

The door slid open and I curled up on the little scrap of bunch that remained. I caught a few side-eye glances, and a few smiles. Just like Managua. For that matter, just like Java! Up front, the driver kept his eyes on the road; in the back, the bus assistant collected fares, dealt out change from a stack of bills he kept shuffled like a hand of Texas Hold'Em, and hung out the window looking for prospective fares. It all seemed so normal. 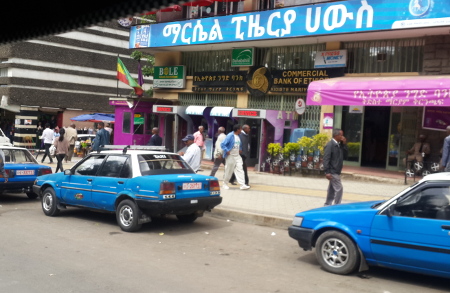 The whole ride there, I was a Peace Corps volunteer again, with nothing but my backpack and a sense of direction, and the confidence I'd be able to figure things out in a country where people are generally kind hearted and just going about their day. Strip away the language and the very foreign-looking ge'ez script with which they write, and these people are doing the same things with their day as the Managuans are, or the Jakartans, or the Beninois. Moreover, there was a sense of contact that I sorely lack when going from project offices to bureaucratic meetings in chauffered 4x4 vehicles driven by project staff. How long has it been since I've had that connection? Certainly not since I started my "career." I felt this way riding the Chocoyo (bus) down the mountains from San Sebastián de Yalí, camped out on the roof of a copra schooner steaming westward through the Lower Sundas, biking the rice fields of Yogyakarta, walking all night down a country road through the smoke of fires set to clear corn stubble, sleeping under wafting tendrils of mosquito coil smoke, secure that the very few things I need in the world -- and maybe not even that -- are tucked into a backpack I can carry around all day.

So there it is: my adventure was riding a bus across town. But wasn't a trip of 5 kilometers. I measure it, rather, in years: 27 or so, to be exact, back to a time when I traveled like the people, and found meaning in simplicity and the kindness of strangers. I should be so fortunate as to be reminded more frequently than I have, what it feels like to be stripped of language and map and internet access and the like.

Bootnote: was wondering how my system would cope with Ethiopic (Ge'ez) script: not well. It's easy enough to compose the characters in emacs but I had to use HTML codes in the body text, and Serendipity wanted nothing of the sort in the title field. Grr.